Closing Guantanamo to Save US up to $82Mln Annually - Pentagon Official 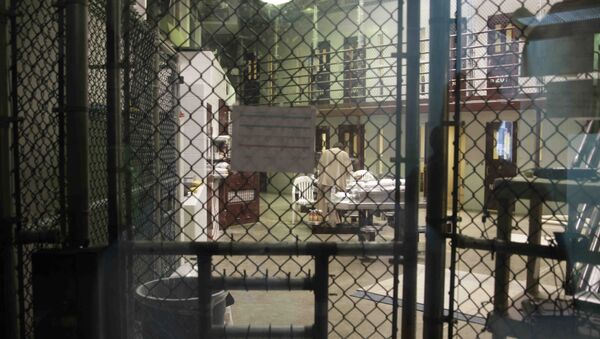 Transporting detainees to the US rather than keeping them in the Guantanamo Bay center will allow the state saving up to $82 million annually, US Department of Defense Special Envoy told Sputnik on Wednesday.

WASHINGTON (Sputnik), Leandra Bernstein — Shutting down the Guantanamo Bay detention center will save the United States as much as $82 million annually, US Department of Defense Special Envoy for Gitmo Closure Paul Lewis said.

"Our basic point is, if we transfer detainees to the United States, it will be less expensive and we estimated…the best case scenario, we could save $82 million per year," Lewis said.

US Senators Introduce Legislation to Ban Return of Guantanamo Bay to Cuba
In February, US President Barack Obama sent Congress a plan to close the Gitmo facility including estimates for the amount of money the United States could save on the current $334 million per year cost of running the detention center.

Lewis cited Defense Department estimates that the initial costs for transferring Guantanamo prisoners to the United States could be paid back in two or three years.

Kerry Says to Personally Oppose Closure of US Naval Base at Guantanamo Bay
The cost of transferring Gitmo prisoners to the United States remains inexact because the Pentagon has not yet chosen a facility.

The Obama administration is still looking at options to house Gitmo prisoners at a federal non-military facility "or we start from scratch," Lewis said.

The Pentagon began looking into possible sites to house Gitmo detainees in the US states of Kansas and Colorado. President Obama has pledged to close down the Gitmo prison before his term in office ends in January 2017.