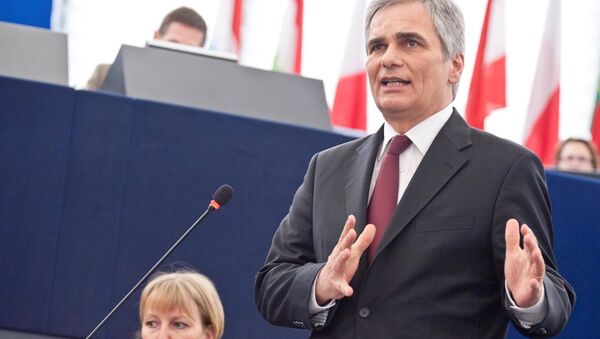 The ongoing row between Austria and Germany has widened, with Austrian Chancellor Werner Faymann saying his country is not a "waiting room for Germany" in a fresh attack on Berlin's approach to the migration crisis.

Responding to criticism of Austria's decision to implement caps on the number of refugees and migrants allowed to enter the country, Faymann justified his government's actions, while taking aim at the "unorganized chaos" of the EU.

"Austria is not a waiting room for Germany," he said at a joint press conference with European Council chief Donald Tusk, adding that he was not prepared to accept the "policy of waving through" refugees and migrants to other EU member states through Austria.

"This disorganized chaos must end… It's important to have clarity on the EU's external borders. (Otherwise) Austrians have to be active on their borders."

In a sign of his frustration over Germany's 'open door' refugee policy, Faymann said Berlin: "should set up a daily quota and then bring these refugees directly from Greece, Turkey or Jordan.

"Austria cannot and must not become a distribution hub [for refugees]. There must be an end to that," he told the Kurier newspaper.

Faymann hit back at recent German criticism, saying that Berlin's actions had forced Austria to introduce daily refugee caps, adding he could not accept "that several thousands of people are waved through every day, [while] on the other hand Germany informs us that today it will only allow 1,000 or 2,000 into the country."

Today we are opening a new chapter called "Back to Schengen" in our struggle with the migration crisis pic.twitter.com/b0cY18oX1G

German Chancellor Angela Merkel had repeatedly ruled out placing an upper limit on the number of refugees Germany is willing to accept, despite the country receiving more than one million in 2015.

The German chancellor also hit back at Faymann's criticism, calling for European borders to remain open.

"Anyone who closes national borders doesn't do anything against the causes for the refugee movement," she said.

"We have to find sustainable solutions that we will still be able to justify tomorrow […] Above all, [we need] solutions that don't set up something on one side that other countries simply have to deal with."

The fallout between the close allies comes as the EU struggles to get member states to agree on a common approach to stem the flow of refugees and migrants into Europe.

While Germany has thrown its support behind plans to implement a refugee relocation system, other states, such as the Visegrad Four — Poland, Hungary, Slovakia and the Czech Republic — have rejected any calls to impose a compulsory relocation of refugees throughout the bloc.