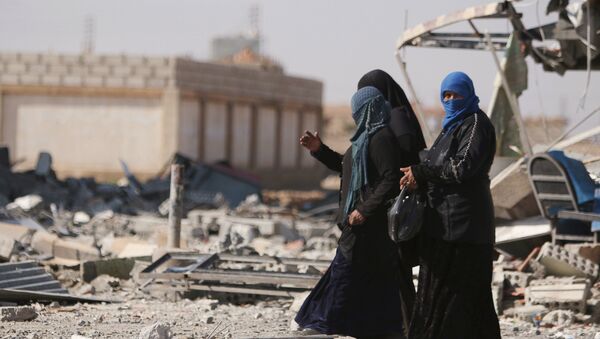 © REUTERS / Rodi Said
Subscribe
Adhering to the ceasefire deal, brokered by Russia and the United States, is merely a "tactical step" meant only to "buy time" for some of the players involved in the deadly Syrian conflict, including the United States, Turkey, Saudi Arabia and Qatar, international security analyst and political scientist Sait Yılmaz told Sputnik.

"There is no detailed framework for resolving the Syrian crisis. For this reason maintaining the truce is impossible," he added.

The ceasefire between Damascus and opposition forces came into effect late on Friday. The deal excludes Daesh, al-Nusra Front and other groups designated as terrorists by the United Nations.

Sait Yılmaz also mentioned that Syria's peaceful life was shattered by "efforts of several players, including the United States, Saudi Arabia, Qatar and Turkey." They, according to the expert, are the ones who sparked the deadly conflict in a once stable nation and who could undermine the nascent peace process.

Turkey Could Wreck Syrian Ceasefire, Set Off Wider War - Ex US Colonel
In this context, Ankara is of particular concern. On Monday, Lieutenant General Sergei Kuralenko, the commander of the Russian center on reconciliation in Syria, warned that Turkey was amassing forces on its border with the Arab Republic. These activities amount to "a provocation," which could derail the fragile ceasefire, he added.

Sait Yılmaz chastised Washington for its "Assad must go" stance, saying that the US leadership "should support this strong leader in order to find ways to resolve the crisis." At the same time, the analyst noted that this is not what Washington seems to be aiming at.

"Syria has never been a priority for the United States. The American strategy has been focused on Iraq, which is on the verge of collapse. … Ultimately, Washington wants to create a Kurdish energy corridor, control the regional balance of power and strengthen its own standing" in the Middle East, he observed.

000000
Popular comments
Mr.Putin is a fox.He will outwit them any time any day.
kasivasantha
1 March 2016, 12:21 GMT3
000000
The deal lasts 2 weeks!! Is not a complete deal is a truce. German Chancellor wants it extended and left that way. Russia shouldn't fall for it. But I would extend it 1 or 2 months IF it proves efficient and the opposition is willing to come to terms with Damascus. IF they place pre conditions, it will serve to open corridors for humanitarian aid.. Terrorists act as told by Washington, E.U , U.K and of course some mid east players. I was watching F.X , add the O.... and what they said? That there are violations by Russia and Hezbollah. And France asking to watch them and trying to get them to talk ONLY about Russia and Hezbollah. France is a CHARLATAN COUNTRY, and Russia still living into Gorbachev NAIVE dreams , could get Russia into a full destruction. Disintegration. Specially when Europe is DESPERATE.
cast235
1 March 2016, 12:37 GMT1
000000
Newsfeed
0
New firstOld first
loader
LIVE
Заголовок открываемого материала
Access to the chat has been blocked for violating the rules . You will be able to participate again through:∞. If you do not agree with the blocking, please use the feedback form
The discussion is closed. You can participate in the discussion within 24 hours after the publication of the article.
To participate in the discussion
log in or register
loader
Chats
Заголовок открываемого материала
Worldwide
InternationalEnglishEnglishMundoEspañolSpanish
Europe
DeutschlandDeutschGermanFranceFrançaisFrenchΕλλάδαΕλληνικάGreekItaliaItalianoItalianČeská republikaČeštinaCzechPolskaPolskiPolishСрбиjаСрпскиSerbianLatvijaLatviešuLatvianLietuvaLietuviųLithuanianMoldovaMoldoveneascăMoldavianБеларусьБеларускiBelarusian
Transcaucasia
ԱրմենիաՀայերենArmenianАҧсныАҧсышәалаAbkhazХуссар ИрыстонИронауОssetianსაქართველოქართულიGeorgianAzərbaycanАzərbaycancaAzerbaijani
Middle East
Sputnik عربيArabicArabicTürkiyeTürkçeTurkishSputnik ایرانPersianPersianSputnik افغانستانDariDari
Central Asia
ҚазақстанҚазақ тіліKazakhКыргызстанКыргызчаKyrgyzOʻzbekistonЎзбекчаUzbekТоҷикистонТоҷикӣTajik
East & Southeast Asia
Việt NamTiếng ViệtVietnamese日本日本語Japanese俄罗斯卫星通讯社中文（简体）Chinese (simplified)俄罗斯卫星通讯社中文（繁体）Chinese (traditional)
South America
BrasilPortuguêsPortuguese
NewsfeedBreaking
17:06 GMTBoris's Johnson: PM Cracks Joke About his Fertility at Post-Reshuffle Cabinet Meeting
16:23 GMTTikTok Bans Hashtag Linked to Cyberbullying of French Students Born in 2010, Reports Say
16:21 GMTUS Defence Secretary Approves Request to Deploy 100 Troops at Capitol Protest
16:04 GMTCanada Caught Off Guard By New AUKUS Security Pact, Report Says
16:01 GMTRepublican FEC Member Doesn't Rule Out Bias in Twitter Banning Hunter Biden Laptop Story
16:00 GMTTel Aviv ‘Significantly’ Expanding Red Sea Presence Amid Alleged Iran Threat: Ex-Israeli Navy Chief
15:56 GMTFinal 9/11 Hearing Abruptly Cancelled at Gitmo Due to COVID-19-Related Illness - Reports
15:47 GMTDemocratic Lawyer Charged in Probe of Trump-Russian Investigation Pleads Not Guilty
15:13 GMTBlinken: US Ready to Delay New Sanctions if Ethiopia and Eritrea Act to Resolve Conflict
14:55 GMTLondon Gang Who Killed NHS Worker From 'Wrong Postcode' Jailed After Murder Sketches Found
14:53 GMTRussia Launching Trials of Simultaneous Vaccination Against Flu, COVID-19
14:30 GMTVideo: Police Act Against Climate Protesters Blocking M25 Motorway
14:15 GMTRonaldo Will Cause as Many Problems as He Solves for Solskjaer, Ex-Liverpool Player Carragher Says
14:03 GMTXi Urges SCO to 'Resist' External Meddling After US, Australia Vow to Bolster Ties With Taiwan
14:02 GMTUN Security Council Holds Meeting on Afghanistan
13:39 GMTHitting US Debt Ceiling Could Trigger Recession, White House Says
13:32 GMTUnited Airlines Briefly Grounded Flights in US, Canada Due to Computer Issues, FAA Says
13:29 GMTDutch Acting Defense Minister Resigns Over Kabul Evacuations Chaos, Reports Suggest
13:27 GMTFrance Says It Cannot Trust Australia in Trade Talks After Canberra Ditched Joint Sub Deal
13:20 GMTPiers Morgan Says His New Job Will Be 'Stuff of Nightmares' for Meghan Markle