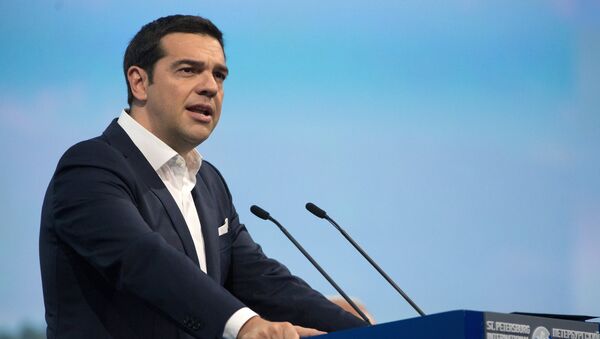 © Sputnik / Sergey Guneev
/
Go to the photo bank
Subscribe
According to the Greek prime minister, Athens is expecting the country's economy to return to grownth in the second half of 2016.

"In the second half of 2016, we will return to growth, and capital controls will end," Tsipras told the Greek Star channel.

Investment in Green Energy Soars Amid Slumping Oil Prices
In June, the Greek government introduced controls on bank withdrawals and overseas transactions in fear of a bank run amid the country's economic crisis. Cash withdrawals were limited to 60 euros ($65.28) a day, while companies' foreign payments were limited to 100,000 euros and Greek citizens were prohibited from opening foreign bank accounts or buying shares abroad.

In October, the Hellenic Banks Association stated that the controls could be lifted by late 2015, while in late December, the president of the association said that capital controls could be lifted in the first half of 2016 following the recapitalization of Greek banks. Since then, Greek banks received some 14 billion euros in funding from international creditors, according to the European Central Bank.

There is no more risk of a "haircut" tax on deposits, Tsipras said, adding that Greece has fully complied with conditions demanded by international creditors in return for the third bailout loan.

The International Monetary Fund is yet to be convinced of the fulfilled demands, while the eurozone creditors will return for assessment before March 10, following the Eurogroup meeting of eurozone's financial ministers, according to the prime minister.

The Tsipras government has been carrying out economic reforms since August, when European finance ministers and the IMF approved an 86-billion-euro ($93 billion) bailout package aimed at rebuilding Greece's economy. Under the deal, the international lenders secured the Greek government's agreement to reform labor markets, privatize state assets and recapitalize banks.