Golden Thread: What is the Reason for Russia, China, Iran Partnership 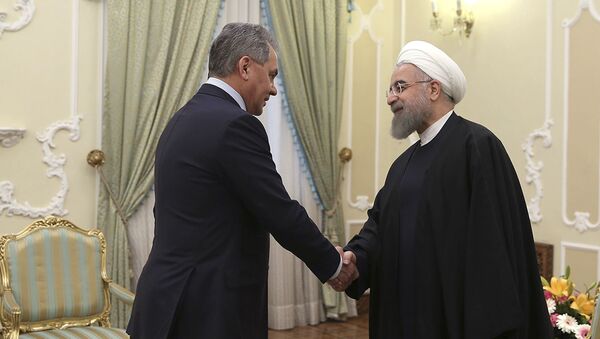 The common "golden thread" connecting China, Iran and Russia is their principled insistence that borders, national sovereignty and independence are inviolable principles, F. William Engdahl notes, adding their commitment to these fundamental values of the UN Charter may save the world from self-destruction.

Washington is obviously not happy about the emerging triple alliance of Iran, China and Russia; the US' cunning policy-makers have repeatedly tried to drive a wedge between the powers, but these attempts have failed.

"If the intent of the Obama Iran strategy was to woo the great Persian nation to the West in a complex geopolitical game, and turn her against Russia, China and the emerging Eurasian Century being constructed around China's One Belt, One Road project, it is emerging as another colossal failure," American author, researcher and risk strategic consultant F. William Engdahl writes in his article for New Eastern Outlook.

Rising Dragon: What Lies Behind China’s Multi-Billion Global Investments
Regardless of Washington's intrigues, the "newly-sanction-free" Iran has rushed to establish close ties with its Eurasian neighbors.

Beijing and Tehran envisage the construction of the new high-speed rail infrastructure that will break Iran's economic isolation, paving the way for the upcoming Eurasian economic boom, Engdahl underscores.

In addition, Iran is likely to be invited to full membership status in the Shanghai Cooperation Organization (SCO) later this year.

Remarkably, the six full members of the SCO occupy territory that accounts for 60 percent of the Eurasian continent and a quarter of the world's population.

"During [Sino-Iranian] talks in Tehran on January 26… Iran's Supreme Leader, Ayatollah Ali Khamenei, who has final say on all state matters, told Xi Jinping that Iran will continue its policy of bolstering ties with the 'East,' lauding China's 'independent' stance in global issues," the researcher points out.

Furthermore, Ayatollah Khamenei added that the Western political establishment has failed to win hearts and minds of the Iranian people.

"Westerners have never obtained the trust of the Iranian nation. The government and nation of Iran have always sought expanding relations with independent and trustful countries like China," Iran's Supreme leader stressed, as quoted by the researcher.

Oil Prices Slump: How Sino-Russian De-Dollarization May Save the Day
The nations have kicked off a series of bold infrastructural projects engaging Pakistan and Iraq in their fold.

"These Iranian, Chinese, Iraqi and Pakistani infrastructure developments have enormous geopolitical implications for the future of the Eurasian landmass, a space enclosing almost three billion people, almost half the world's population, with vast natural resources, educated work forces and world class scientists from Russia to China to Iran and beyond," the strategic risk consultant highlights.

Indeed, Russia plays an important role in the "golden triangle" of major emerging Eurasian powers. Therefore Foreign Minister Mohammad Javad Zarif stressed in one of his statements, largely neglected by the Western media sources, that Tehran would never forget those who stood by it during the harsh period of sanctions, referring in particular to Russia and China.

Moreover, Tehran and Moscow have reached an agreement regarding the supplies of new generation S-300 missile systems. The Iranian leadership is expecting the completion of deliveries of the improved Russian missile defense system in the first half of 2016.

The partnership of Iran, China and Russia is based on mutual trust and respect.

"The common golden thread binding the three great Eurasian cultures and nations — China, Iran, Russia — is their principled insistence that, as with individual human beings, so with nations, borders and national sovereignty are inviolable principles… Their growing cooperation based on respect for national sovereignty may just save the world from self-destruction. That would be to the good," Engdahl concludes.