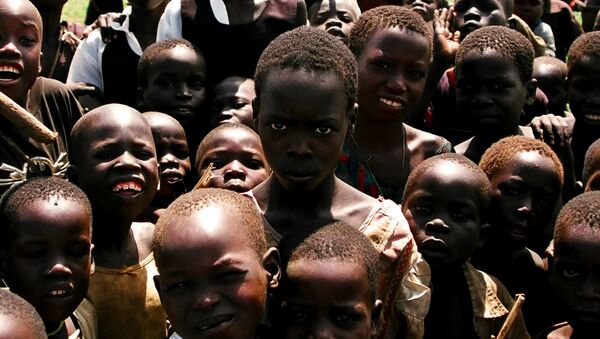 © Flickr / Ed
Subscribe
According to children’s charity Kyampisi Childcare Ministries (KCM), there were several documented cases of child sacrifice in several districts of central Uganda during the recent election period.

Seeing Is Believing: African Children Amazed by Flying Drone
Child and adult sacrifices are relatively common in the East African country, where many believe that the killing of another human being acts as an offering to an unidentified entity that will, in turn, guarantee monetary wealth, physical health and protection from evil spirits.

KCM, which cares for children rescued from attempted sacrifices, said Monday that six children were recently mutilated and murdered in the Ssembabule, Mukono, Buikwe and Mubende districts. The child killings were reported from October 2015, to February 2016, during the run-up to the Ugandan presidential and parliamentary elections.

Shelin Kasozi of KCM told Reuters that those accused of the killings had been arrested and detained, but the cases had yet to go to court.

"Child sacrifice cases are common during election time," she admitted. "We think the killings were election-related."

According to a 2011 report by KCM and UK-based charity Jubilee Campaign, there are hundreds of unreported cases, including macabre instances of burying children alive and cutting and draining their blood, that do not come to the attention of state authorities.

Moscow Urges UN Rights Bodies to Address Middle East, North Africa Crises
Moses Binoga, coordinator of an anti-trafficking task force at the interior ministry, said that a probe was ongoing and claimed that the government had no evidence that children being killed in the belief that their deaths would improve the chances of a candidate's election win. Boniga did confirm that children had been reported missing in the election period and that several child and adult sacrifice cases occur in Uganda annually.

In those cases victims were found mutilated, sometimes with hearts or livers removed, and, in two cases, without heads. According to the UN, in 2015 the African continent saw a dramatic increase in attacks on albinos, also linked to belief rituals said to be ordered by various political candidates.

The elections in Uganda were held on February 18, resulting in President Yoweri Museveni returning to power for a 5th term.

000000
Popular comments
But before there are screams about uncivilised Africans, read this on similar cases in the West: nexusilluminati.blogspot.de/2016/02/queen-elizabeth-found-guilty-in-missing.html

Mother Gorilla
2 March 2016, 01:50 GMT
000000
Its not Uganda thats the problem, its the ideology of secularism thats the problem. Secular governments without God feed off of evil. While this article is terrible news, the chaos secular governments bring to the world as they sacrifice hundreds of thousands to serve their false gods is the real story. The archdemon in DC is one of the few demons mentioned in the Bible, it appears as an angel that fouls everything up.
Want2B Wiseguy
2 March 2016, 07:59 GMT
000000
Newsfeed
0
New firstOld first
loader
LIVE
Заголовок открываемого материала
Access to the chat has been blocked for violating the rules . You will be able to participate again through:∞. If you do not agree with the blocking, please use the feedback form
The discussion is closed. You can participate in the discussion within 24 hours after the publication of the article.
To participate in the discussion
log in or register
loader
Chats
Заголовок открываемого материала
Worldwide
InternationalEnglishEnglishMundoEspañolSpanish
Europe
DeutschlandDeutschGermanFranceFrançaisFrenchΕλλάδαΕλληνικάGreekItaliaItalianoItalianČeská republikaČeštinaCzechPolskaPolskiPolishСрбиjаСрпскиSerbianLatvijaLatviešuLatvianLietuvaLietuviųLithuanianMoldovaMoldoveneascăMoldavianБеларусьБеларускiBelarusian
Transcaucasia
ԱրմենիաՀայերենArmenianАҧсныАҧсышәалаAbkhazХуссар ИрыстонИронауОssetianსაქართველოქართულიGeorgianAzərbaycanАzərbaycancaAzerbaijani
Middle East
Sputnik عربيArabicArabicTürkiyeTürkçeTurkishSputnik ایرانPersianPersianSputnik افغانستانDariDari
Central Asia
ҚазақстанҚазақ тіліKazakhКыргызстанКыргызчаKyrgyzOʻzbekistonЎзбекчаUzbekТоҷикистонТоҷикӣTajik
East & Southeast Asia
Việt NamTiếng ViệtVietnamese日本日本語Japanese俄罗斯卫星通讯社中文（简体）Chinese (simplified)俄罗斯卫星通讯社中文（繁体）Chinese (traditional)
South America
BrasilPortuguêsPortuguese
NewsfeedBreaking
22:01 GMTMilitants in Aleppo Tried to Force Way From Turkish-Controlled Area - Russian Military
21:48 GMTGermans See No Use to Vote for CDU Without Merkel at Helm - Afd Politician
21:19 GMTGerman Conservatives Suffer Catastrophic Defeat in General Election – Senior Official
21:00 GMTGermany's FDP Leader Hints at Coalition Talks With Greens
20:45 GMTMacron Files Complaint Against Paparazzi for Invasion of Privacy - Reports
20:16 GMTTwitter Removes Blue Verified Badge From Accounts of Several Afghan Ministries - Reports
20:00 GMTLaschet, Scholz Want Coalition Talks to End by Christmas
19:41 GMTCIA Was Ready to Start Firefight in London to Prevent Russia From Busting Out Assange, Media Claims
19:20 GMTSuicide Pact? Top Labour Remainer Says Party Should Campaign to Rejoin EU
18:58 GMTVideo: Miss France 2019 Confronted by 'Teenage Gang' That Threw Stones at Her in Paris
18:47 GMTFree For All! Enraged Moped Drivers Fight in London Amid Lack of Fuel - Video
18:39 GMTPSG's Kylian Mbappe Caught on Camera 'Lamenting Neymar Would Not Give Him Passes'
18:35 GMTPowerful 5.7-Magnitude Earthquake Hits Philippines' Largest Island Luzon
18:00 GMTInfrastructure Plan: Pelosi Says She 'Never' Brings a Bill to Floor 'That Doesn't Have the Votes'
17:43 GMTUsyk vs. Fury? Gypsy King's Twitter Like Leaves Fans Buzzing About Possible Heavyweight Clash
16:50 GMTLabour Leader Demands Visas For 100K Foreign Lorry Drivers Amid Global Shortage
16:33 GMTLabour Staff Cuts That Prompted Strike Ballot Due to £2m-a-Year Legal Costs
16:23 GMTDHS Chief Reveals Up to 12,000 Haitians Who Crossed Southern Border Were Released Into US
16:21 GMTTurkey Wants US Military to Leave Syria, Iraq After Afghanistan Withdrawal, Erdogan Says
16:06 GMTSPD Leads in German Election Polls With 25.8% as Merkel's Bloc on Track for Worst Result Since 1949