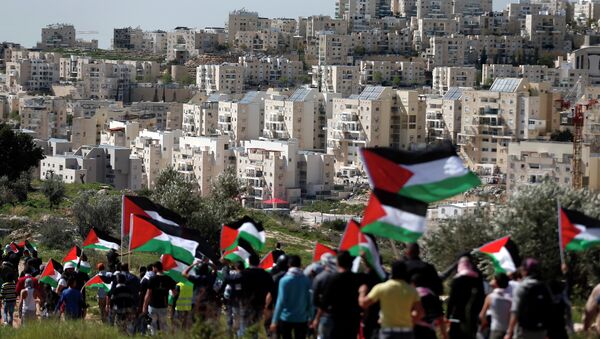 © AFP 2023 / THOMAS COEX
Subscribe
International
India
Africa
The Palestinian foreign minister called on the international community not to communicate with the “occupational system” and prevent “illegal settlers” from entering their countries.

GENEVA (Sputnik) — Palestinian Foreign Minister Riyad Maliki on Tuesday called on the world to boycott products made in the settlements built by Israel on occupied territories of the West Bank, and not to allow their inhabitants to travel to other countries.

"I urge all countries to boycott the products of the settlements and villages, as well as to announce the possibility of an introduction of economic and trade sanctions against the occupying power," Maliki said, speaking at a session of the UN Council on Human Rights (HRC) in Geneva.

According to Maliki, the international community should not, directly or indirectly, communicate with the “occupational system” and should prevent “illegal settlers” from entering their countries.

Russia-US Ceasefire Plan for Syria May Help Israel-Palestine Peace Process
Palestine seeks the recognition of its independent state on territories in the West Bank, including East Jerusalem, and the Gaza Strip — lands occupied by Israel since the 1967 Six-Day War. Israel has been building settlements on these occupied territories, despite objections from the United Nations.