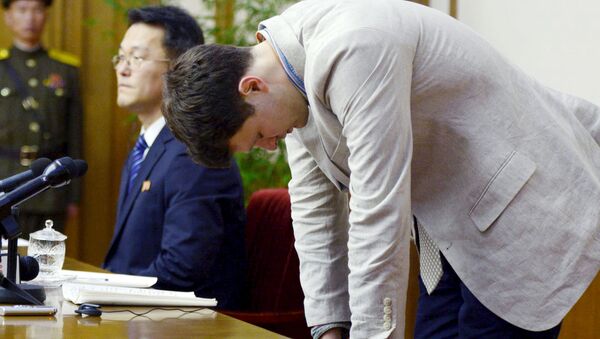 © REUTERS / Kyodo
Subscribe
International
India
Africa
US student Otto Frederick Warmbier, who has been arrested by North Korean authorities, confessed to trying to steal a political banner, an action that was classified by Pyongyang as a "hostile act" against the government, media reported Monday.

US Presents Draft N Korea UN Resolution With ‘Strongest Set of Sanctions’
MOSCOW (Sputnik) – Otto Frederick Warmbier was detained in North Korea on January 2. Local media reported that he was detained for commitment of some "hostile act," however they had not revealed any details.

According to a video obtained by CNN, Warmbier held a press conference and confessed that he tried to take down a political slogan from the staff holding area of the Yanggakdo International Hotel where he was staying.

The broadcaster added that Warmbier begged pardon for the "worst mistake" in his life and said he was "manipulated" by the US government.

North Korea has a long history of detaining foreigners.

In 2009, North Korea arrested two US reporters, who made a film about the refugees from North Korea. The reporters were sentenced to 12 years in work camps, on a charge of illegal border crossing and filming. Later in the year they were released due to the efforts of the US authorities.