On the Hook: Turkish Political Flop in Syria 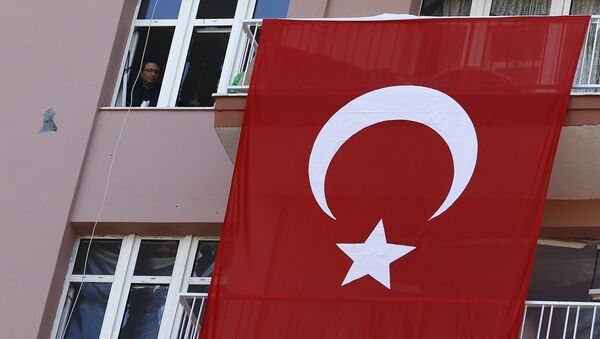 © AFP 2021 / UMIT BEKTAS / POOL
Subscribe
In a response to the recent comment of White House Press Secretary Josh Earnest that “Russia, and President Putin personally, are on the hook” in the Syrian ceasefire, Al-Monitor, a US-based website which reports Middle Eastern news, noted that it is not Russia, but rather Turkey which is actually on the hook there, and explained why.

In Full Control: Whatever Happens Next in Syria Will be Decided in Moscow
In a recent press briefing at the White House, Press Secretary Josh Earnest claimed that “Russia and President Putin personally are on the hook” in the Syrian ceasefire “for making sure that this understanding is successfully implemented.”

Earnest added that both Russia and its leader “have a lot of skin in the game”.

However, Al-Monitor, a US-based website which reports Middle Eastern news, is convinced that it is Turkey which has actually been trapped in the region.

Recep Tayyip Erdogan and Ahmet Davutoglu dropped their desire for a Turkish military intervention into Syria back in September 2015, when Russia began its direct military involvement in the country, Gursel explained in his column.

What they now wanted was “to save Ankara from being totally sidelined from the Syrian equation and ensure it had some say on Syria’s future.”

Turkey 'Main Violator' of Ceasefire Regime in Syria's North
“Sending the Turkish army to Syria, they reckoned, was the only option left at hand to grab a prominent seat at the negotiating table.”

However the Turkish leaders have failed to enlist any support from the US; they and their ally Saudi Arabia “failed to impress the other actors in the crisis when it declared “readiness” to send ground troops to Syria, provided the US-led coalition against the Islamic State (Daesh/ISIS) made “a decision to have a ground component, the political analyst explained.

“Ankara’s Syrian policy — basically an attempt to topple Assad and install Islamists to power in Damascus — collapsed a long time ago,” he said.

The Ankara-backed jihadis and other radical Islamists keep losing ground against the Russian-backed Syrian army and the People’s Protection Units (YPG), the armed force of the Syrian Kurds. Now that the intervention idea is also dropped, what options could be left for Erdogan and Davutoglu to sustain their claim in Syria?” the columnist then questioned.

As it turns, Ankara does not have much at hand.

Syrian Army Repulses Daesh Attacks, Kills Some 30 Militants - Reports
“Due to the Russian threat, the Turkish air force has been unable to fly planes in Syrian air space. Now that a ground operation is also off the table, Ankara’s intervention capacity is limited to artillery fire with a range of 40 kilometers (25 miles), artillery rockets and its warplanes’ capability to strike from a distance,” Gursel says.

In sum, Ankara has given up the idea of intervention, the columnist states, but the position it maintains keeps the risk of a military confrontation with Russia alive.

The website also asked some retired Turkish ambassadors, who served under the country’s ruling Justice and Development Party (AKP) to explain why Ankara finds itself isolated and unable to influence regional events that are having seriously negative effects on Turkey’s interests.

Russia’s Syrian Puzzle: How the West Misread Putin
Retired Ambassador Uluc Ozulker explained to another website columnist, Semih Idiz, that the AKP has abandoned the foreign policy framework drawn up by Mustafa Kemal Ataturk, the founder of modern Turkey, to remain westward-looking.

“AKP allowed Turkey to drift away from the West but failed to find a new port for itself. It asked to be admitted to the Shanghai Cooperation Organization but failed. Today it is isolated and does not know where it belongs. There are signs that it is trying to return to the Western fold, but even that is tentative,” Ozulker explained.

The AKP also tried to implement policies that were beyond Turkey’s means and capabilities, the former diplomat added. Turkey’s foreign policy in the past was cautious and defensive. When the Turkish economy started growing, the AKP used this, combining it with its ‘national vision’ outlook, to pursue more active policies.

“It aimed for good relations with neighbors but tried to achieve this from the perspective of a patronizing big brother, which gradually alienated its neighbors and other regional powers,” he stated.

“The assumption was that Turkey was the principal player who could rearrange things and change the established order in the region according to its will. But realpolitik and Turkey’s geopolitical place was never conducive to achieving this.”

Does Erdogan See Himself as a 21st Century Ottoman Sultan?
This view is echoed by retired Ambassador Temel Iskit, who said that the assumption that Turkey could be the regional Sunni leader was not only out of tune with Turkey’s traditional policies, but also not realistic.

“The Syrian crisis provided a concrete example of how misguided all of this was. Of course everyone made a mistake in Syria,” the retired diplomat said.

“The assumption in the heady days of the Arab Spring was that the [regime of Syrian President Bashar al-Assad] would be replaced quickly by a democratic one,” Iskit added.

"Ankara’s real mistake, however, was that it insisted on maintaining its original mistake even after everyone else woke up to the reality of what was going on in that country."

Iskit said President Recep Tayyip Erdogan, more than Davutoglu, is the main reason Turkey finds itself in its current position.

“Erdogan tried to impose his personal outlook on others, and when they refused to accept this, as in the case of Assad, he became their enemy and pursued what amounts to a kind of blood feud against them. This is also why Turkey is at odds with the West, with Russia and with just about everyone else today,” Iskit said.

“He has been overtaken by hubris and personal obsessions."

Retired Ambassador Murat Bilhan has also commented on the issue, saying that Turkey’s decision-makers did not take expert advice seriously and, thus, added to their mistakes.

“Strategic mistakes cannot be corrected by tactical moves,” Bilhan said, indicating there is nothing diplomacy cannot solve, provided failed policies are reversed. “Decision-makers always have the final say, but their decisions should also factor in the views of experts."

000000
Popular comments
TOO many los their lives in HORRIBLE ways. I was hearing a woman. They described that IS grabbed a pregnant woman. Open her entire belly took the baby out and decapitated it before the woman died. Someone should pay for this. Mc Cain was in videos hugging terrorists. requesting weapons. All west media were in chorus that Assad was killing innocent civilians. A VILE lie. The world shouldn't allow those that armed opposition to live. They done more atrocities that the NAZIS, just in smaller scale, but horrendous atrocities. Often , giving neighbor girls to the guys , IF they joined. If they liked any girl, they will get her. This was another tale of a girl. They should jail all. Obama. Mc Cain and all responsible. Erdogan. Saudi. E.U commission. Cameron. Cleanse the world of this TRASH. Before they start WW3 for real. WW3 won't start with Syria. But they getting away with it. IF an abusive husband is allowed to go. Or woman drop charges. Often the abuse will increase. Until a tragedy may take place.
cast235
29 February 2016, 10:44 GMT
000000
Seems that, for US high ranking officials, speaking a language of a schoolyard bully is proof of smartness. It's jut an indicator of lack of education and weak nerves.