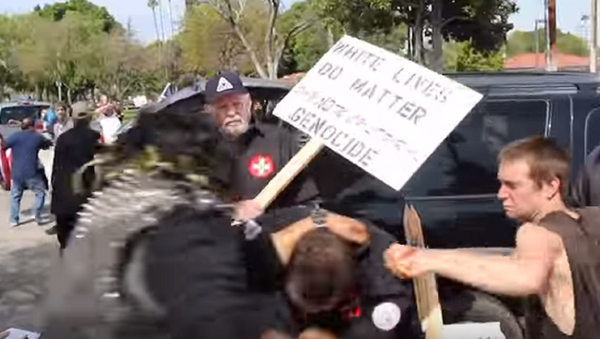 One person was critically wounded after three people were stabbed at a Ku Klux Klan rally in Anaheim, California. The violent encounter between the hate group and counter-protesters was captured on camera by witnesses.

On Monday, all five members of the arrested KKK were released, with the Anaheim Police Department stating that the stabbing was in self defense. The police also re-arrested a juvenile who had previously been released, based on the video footage; he is currently being held on a charge of assault with a deadly weapon.

The KKK was reportedly swarmed by anti-Fascist counter-protesters when they arrived at the park for their rally. The hate group complained that they were attacked by at least one person with a wooden plank, who smashed a window on their vehicle. Someone also reportedly began kicking a man wearing a KKK “Grand Dragon” shirt.

One of the counter-protesters was reportedly stabbed with the end of a flag pole.

"The release was based on the video evidence and statements that present convincing evidence of self-defense," Wyatt told the OC Weekly.

The Orange County District Attorney's office will be reviewing the case and making a final determination on whether charges will be filed.

"Regardless of an individual or group’s beliefs or ideologies, they are entitled to live without the fear of physical violence and have the right, under the law, to defend themselves when attacked," the police department stated.