Dutch Vote on EU-Ukraine Association Deal Is 'Headache' for Brussels 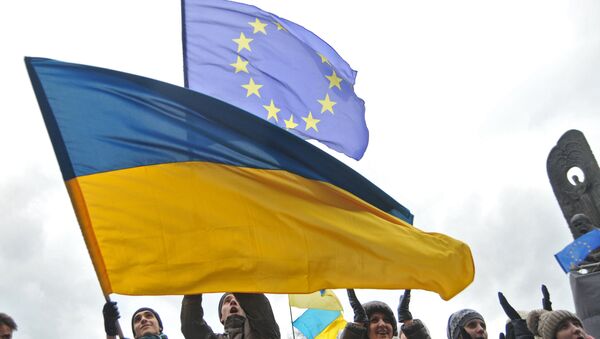 Dutch voters may give Brussels a headache when they vote on the EU-Ukraine Association Agreement that was signed in 2014, in which Kiev promised reforms it has not implemented, Kiev-based Dutch journalist Stefan Huijboom told Sputnik.

The Ukrainian economy is not ready for integration with the EU and its government has not implemented the reforms it promised, making it likely that Dutch voters will reject the EU-Ukraine Association Agreement when they vote in a referendum on April 6, Kiev-based Dutch journalist Stefan Huijboom told Radio Sputnik.

​"First of all, we're talking about a country that is at war, there's unrest in the East. European integration just means that the unrest in Ukraine will become an even bigger European problem," Huijboom said.

Kiev Accused of Plot to Disrupt Dutch Referendum on Association Agreement
Meanwhile, Ukraine is mired in an economic crisis, President Poroshenko's promised campaign to fight corruption has completely failed, and trust in the government is at an all-time low.

"Some extreme right groups have even announced [that they want] a third Maidan because of the distrust in the current government."

"Last but not least, (it is important) not to forget about the huge division of Ukraine in the East. In the Ukrainian government-held territories, many civilians feel closer to Russia than to Europe, so European integration would just fuel their beliefs," Huijboom cautioned.

While EU politicians strive to expand the EU further to the east and are keen to stress the trade benefits of their expansion plans, their enthusiasm is not shared by the European electorate.

"If you take a closer look at what is really happening in Europe, Euroscepticism is on the rise on a national level in a lot of countries; in the UK there will be a referendum about leaving the UK in June, and far-right and Eurosceptic parties are on the rise in the Netherlands and in France."

"There are a lot of people in Europe who feel abandoned by Brussels, which constantly tries to get more and more involved in local and national politics."

Migrant Influx Caused Rise in Crime in Netherlands, Increased Terror Threat
Ukrainian President Petro Poroshenko visited the Netherlands in November, where he asserted that the Dutch referendum on the EU-Ukraine Association Agreement would not make any difference to the agreement, 70 percent of which has already been implemented, Huijboom said.

"The remaining 30 percent depends on the final outcome in the Netherlands and it's not really to be expected that it will be reversed, but it will certainly put Ukraine on the agenda again in Brussels, and possibly cause a headache in Brussels as well."

"No matter what the outcome, Brussels will continue the implementation of the EU agreement, which really means that Brussels doesn't take democracy seriously."