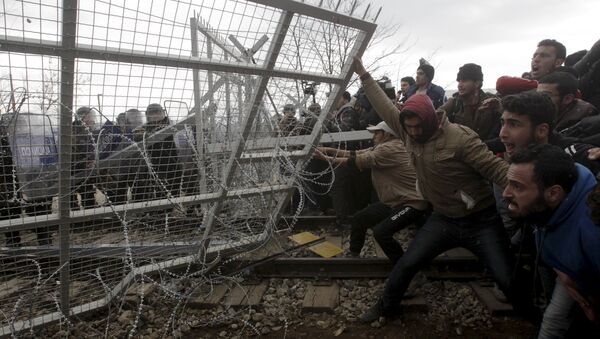 Being starnded at Greece's northern border, a bunch of migrants broke through a fence into Macedonia on Monday, media reported.

MOSCOW (Sputnik) — A group of migrants who had been stranded on Greece's northern border broke through a fence into Macedonia on Monday, media reported.

The migrants used a steel pole as a battering ram to break the border fence, the BBC broadcaster reported. There was no information immediately available about how many migrants managed to cross over into Macedonia.

On Saturday, Greek media reported that up to 6,000 migrants and refugees had amassed in Idomeni camps on the Greek side of the border, awaiting permission to enter a neutral zone on their way to Macedonia.

Europe has been overwhelmed by waves of migrants from Syria and the Middle East, but also other countries, seeking asylum primarily in the wealthier EU member states such as Germany and Austria.

Earlier this month, Macedonia asked the Czech Republic, as well as Hungary, Poland, and Slovakia for assistance in patrolling its border with Greece, the main transit route for refugees coming across the Aegean Sea from Turkey.