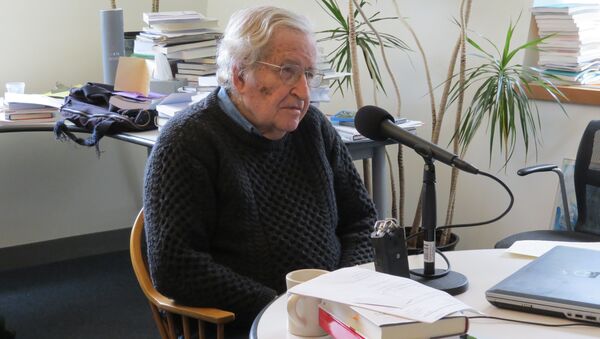 © Sputnik
Subscribe
Speaking to Radio Sputnik's Brian Becker, Noam Chomsky, arguably America's most famous public intellectual, explained how the rightward swing in the US political spectrum has turned the modern Democratic Party into the 'moderate Republicans' of a few decades back, and thrown the Republican Party off the spectrum altogether.

In the Democratic primaries for this year's US presidential election, the party's establishment has pushed strongly for self-described democratic socialist Bernie Sanders' opponent, Hillary Clinton, but despite lacking her connections and arsenal of financial support, Senator Sanders has found a wellspring of support among younger American voters. Becker asked Professor Chomsky about the significance of Sanders' campaign, and of his talk about the need for a 'political revolution' in the United States.

Chomsky suggested that it's necessary to qualify Sanders' use of the phrase.

Sputnik meets with Noam Chomsky to talk about #Trump, hope for the future & more. Listen to the full interview here: http://sptnkne.ws/aJqG #Election2016

"What he's actually calling for is what was pretty well understood and accepted in the 1950s. In fact President Eisenhower wouldn't have been much surprised by his proposals. He's fundamentally…a traditional New Deal Democrat," the academic noted.

Sanders Considered Old Socialist, Clinton 'Dishonest' in New Poll
Furthermore, there's no question, Chomsky said, that Sanders' "positions have been supported by a considerable part of the population, often large majorities, for decades…Take say health care: right now, about 60% of the population supports it, which is pretty remarkable when you think that nobody publically advocates it. Every time it's brought up, it's denounced, but still, a considerable majority supports it."

As for the Sanders campaign promises of free post-secondary education, "that's how it was in the 1950s, virtually. The GI Bill gave not only free education but even subsidies to huge numbers of people – veterans, who would [otherwise have] never have gone to college. It was very good for them, very good for the country. It's part of the reason for the very high and relatively equitable growth rate in the 50s and 60s, before the neoliberal reaction set in. It was common in other countries – rich countries like Germany, poor countries like Mexico."

The Rightward Swing in the US Political Spectrum

Hillary Clinton's Big Win in Nevada Caucus Doesn't Add Up
"These are hardly surprising positions," Chomsky said. "But the fact that they're regarded as extremist, or that it calls for a revolution, is actually a comment on how the spectrum within the mainstream has shifted to the right during the neoliberal years," the academic noted.

Chomsky noted that even Sanders' tame (by 1950s standards) positions have given many in the US leadership cause for alarm, even among the Democratic Party establishment. However, when asked whether he himself believed a real revolution is necessary, Chomsky proposed that "a return" would be the more appropriate phraseology.

"I don't think it takes a political revolution – I think it takes a return to a situation which was far from radical. To illustrate: back in the 1950s, a common quip about the political system (and not inaccurate) was that the United States was a one party state – 'the Business Party' which has two factions, the Democrats and Republicans, which differ somewhat. If you take the situation today, it's still a one party state (the Business Party), but it only has one faction, and it's not the Democrats – it's moderate Republicans, who call themselves Democrats. If you look at today's Democratic Party, it's pretty much what used to be called moderate Republicans."

"Meanwhile," the academic noted, "the Republicans have simply drifted off the political spectrum –they're not a political party in any recognizable form."

'President Trump': From Impossible to Improbable to All But Inevitable?
And Donald Trump, Chomsky said, is not even the worst of it.

"When you speak about the Republican Party, [it's actually about] the Republican establishment being off the spectrum, not Trump. [Trump himself] is an interesting phenomenon, but a different one. Take somebody like Mitch McConnell, who's considered a Republican moderate. What was his reaction to Obama's election? It was very clear: he said 'we have to have one policy: No!' 'Anything that the government proposes, we say no and we block it, because we want to take power.' That's not parliamentary politics."

"And in fact this is recognized by some of the most respected conservative analysts – Norman Ornstein and Thomas Mann of the American Enterprise Institute –a right-wing think tank. They describe not Trump, but the mainstream. They [speak about] today's Republican Party as, in their words, 'a radical insurgency', which has abandoned parliamentary politics."

"And I think the reason is pretty clear," Chomsky noted. "In the United States, and in Europe – in fact everywhere where neoliberal programs have been imposed, there's an undermining of democracy – that's one of their aspects…It's almost automatic, and you can see it happening. One consequence of that is the mainstream center begins to collapse, and you get uprisings at (what are called) both extremes –one is a far right extreme, the other is called left, but is actually center left social democratic like Sanders or Jeremy Corbyn – nothing particularly radical about it." 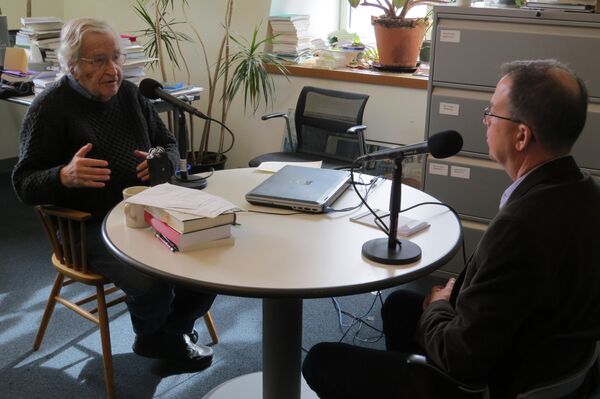 "And as the parties have shifted to the right, the Republicans [have become] so dedicated to the interests of extreme wealth and power that they simply cannot get votes on their own programs, and therefore had to mobilize sectors of the population that have always been there but hadn't been mobilized as a political force. So a substantial plurality or even a majority of Republicans are evangelical Christians – extremist, fundamentalist Christians – people who think the world was created a couple of thousand years ago."

Trump's Presidency Would Be a Death Knell for the Species

Asked to give his thoughts on the idea of a Donald Trump presidency, Chomsky said that "if he means what he says…it's virtually a death knell for the species. Every Republican candidate in the primaries, and Trump specifically, deny that global warming is taking place, or at least that we should do anything about it…And they're acting to try and undermine anything that might deal with it even moderately."

Former Mexican President Won’t Pay for Trump’s 'F*cking Wall'
"Take for example the Paris [climate change] meetings last December – they weren't marvelous, but they achieved something minimal. They were hoping to achieve a treaty [on emissions] with commitments that would be fixed and verifiable. But they couldn't, and it was very clear why they couldn't, and this was even recognized in the mainstream press: Republican Congress wouldn't permit it. They will not permit a verifiable treaty."

Providing another example, Chomsky recalled that "the right wing justices of the Supreme Court, a couple weeks ago…violated long-standing precedent and went out of their way to effectively block efforts to reduce emissions from coal plants. I mean they gave arguments, but the fundamental reason is just the unwillingness of today's Republican organization…to address this question. This is critical to the survival of the species. Support for torture is bad enough – so is the idea of getting Mexico to build a wall, but this is lethal."

Donald Trump Declares Undying Love for Uneducated US Voters
"Why is it happening?" the academic asked. "I think we have to ask where the support for Trump is coming from. There isn't careful data, but it seems to be substantially lower middle class, relatively uneducated white males mostly."

"Hope for the future has declined, for the first time perhaps in [American] history," Chomsky noted.

"I'm old enough to remember the Depression, which was objectively worse than today, but it was a hopeful period. My relatives, [who were] unemployed, factory workers and so on lived much worse than anything today, but they expected that the future would be better – things were happening. CIO [union] organizing was taking place; there was a relatively sympathetic administration; moderate social democratic programs were being instituted. It looked as if somehow we would get out of this. That's not the attitude today. The people who are coming to the Trump rallies are people who, to a large extent, who feel that everything has been taken away from them."

‘White Race Dying Out’: Pro-Trump Calls Warn 'Don't Vote for a Cuban'
As for Donald Trump's stance on immigration, Chomsky noted that it's not really anything new in American history, with Italians, Jews and the Irish facing similar kinds of exclusion and persecution for much of the first half of the 20th century. "This goes way back: 'We're here, we don't want you' [is the mentality]."

"This is real, and is part of the cheering for Trump when he says 'build a wall'. [But] if you think about it, what is that wall supposed to do? In fact what is Obama doing? Obama has been pressuring Mexico to keep the Central Americans away from our border. Why are people fleeing Central America? Because the US destroyed Central America, especially under the Reagan years," Chomsky concluded.

You can listen to the first part of Sputnik's exclusive two-part interview with Dr. Chomsky here. The second part will be broadcast Tuesday.