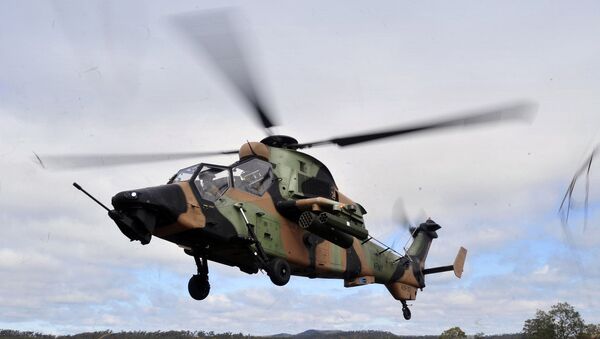 In 2008, Australia purchased 22 Tiger ARH attack helicopters that were celebrated by military-industrial enthusiasts and investors as identical to "the latest Apache model, but using later airframe technology and with different role optimizations." Unfortunately, eight years after spending more than the annual gross domestic product of the 27 poorest countries in the world, Australia’s Tiger "still has not yet achieved final operational capability," and is not ready for combat.

Australia’s 2016 defense white paper, a long-term military logistics and equipment proposition covering the coming decades, notably excluded additional expenditures to make the Tiger combat ready, signaling the beginning of the end for the current version of the aircraft.

Australian defense analysts noted that the Tiger was designed to reduce the number of helicopters, as a way to save money, but "nothing of the sort has happened." Instead, Davies said, "We’ve spent billions of dollars and lost many years of capability because the helicopters weren’t as mature as we thought."

In 2004, Australia received its first Tiger, a lightweight gunship produced by Eurocopter, now part of Airbus, to serve in reconnaissance missions. The Tiger’s specs are comparable to the US Apache AH-64, but lighter, quieter, and with a longer range. The helicopter is also equipped with Hellfire missiles, 70-millimeter Hydra rockets, and 30-millimeter cannon shells, as well as Stinger missiles, providing it with anti-aircraft capacity.

Allies in the so-called "war on terror," including Germany, France, and Spain, successfully deployed variants of the Tiger to combat zones in Afghanistan, but Australia faced challenges with the helicopter that could not be overcome.

The Australian Tiger has consistent software malfunctions that technicians have struggled with for years. Simple day to day repairs could be impossible, as parts had to be shipped to Europe for refurbishment, adding to the delay and cost.

Even more troubling, the air conditioner and power units on the Australian Tigers repeatedly broke down, filling cockpits with toxic black smoke that injured several Australian soldiers. In one incident, "the window jammed shut after not being checked during preflight inspections so the crew was forced to take the risky step of blowing the canopy off to ventilate the cockpit."

Australian military helicopter pilots outright refused to fly the attack chopper. The pilots were outraged, and after repeated incidents and injuries, realized that Australian officials were not going to suspend flying. One Australian military official quipped that, "usually you have to stop military pilots from flying," highlighting the substantial defects in the Australian model.

Still, Australian war hawks can breathe a sigh of relief as the country’s defense white paper still calls for an additional $215 billion military spending to purchase submarines, frigates, patrol vessels, aircrafts, and drones. The expense plan, greater than the GDP of all but 47 countries, will include the Tiger, now considered to be a taxpayer-funded charity benefitting the military industrial complex, as a way of saying thank you for making yet another prohibitively expensive and defective war machine.

000000
Popular comments
Pick up the phone and call Russia, maybe they'll sell you some good military equipment.
Mitach2002
1 March 2016, 00:49 GMT3
000000
The point is not that the aircraft were defective. The point is that Australia (as with New Zealand previously too) bought them off their NATO/European "allies" for 2billion. Such transactions are often simply seen as contributing to the collective budget. Note that Australia is going on a spending splurge and they expect a lot of new toys for their fictional defence narrative. Note that the Australians have also purchased helicopters from the USA - I expect them and those spares parts and systems will like-wise be found to be damaged, problematic, incompatible, unworkable, or whatever terminology the AU military wants to call being screwed.