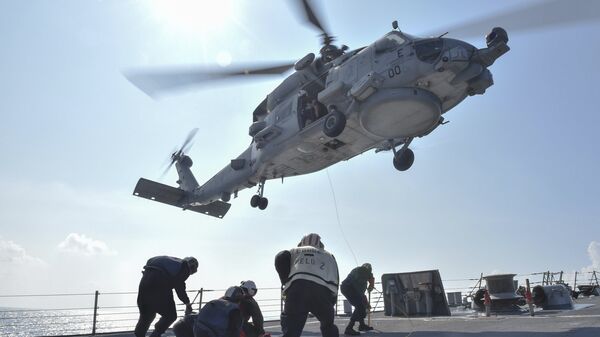 © REUTERS / U.S. Navy
Subscribe
The US needs to focus on its own problems rather than provoke China in the South China Sea, US politician Cynthia McKinney wrote.

US Pacific Command Welcomes Patrols by Any Nation in South China Sea
Geostrategically important sea lanes in the South China Sea are just one line of contention in the US strategy of "playing a dangerous game of 'chicken' with the Chinese and Russians," US politician Cynthia McKinney wrote in RT on Friday.

"Sadly, somewhere in Washington, D.C. a tiny group of insiders is itching for a war with China and Russia," warned McKinney, a former Democratic member of the US House of Representatives from Georgia and Green Party presidential candidate.

In the article, entitled, 'What is America doing in the South China Sea?' the former Congresswoman wrote that "Both the Russians and the Chinese know that Washington has declared war on them. So now, what does this mean for Asians' engagement with each other and Washington’s engagement in Asia?"

China's vision for Asia, including the New Silk Road initiative, envisions a peaceful integration of the region, according to McKinney, but the US blocks Asian-led efforts at integration with provocations such as sending "a steady stream of warships into the area claiming its right to navigate on the high seas," McKinney wrote.

What is America doing in the South China Sea? (Op-Edge) https://t.co/m49Netlm3d pic.twitter.com/gBaYgbxL0f

​On Friday Chinese Foreign Ministry spokesman Hun Lei responded to a statement from Admiral Harry Harris, commander of US Pacific Command, who said on Thursday that the US would ignore a possible declaration from China of a Chinese Air Defense Identification Zone (ADIZ) in the South China Sea.

"I would find that destabilizing and provocative," Harris said.

"We would ignore it, just like we’ve ignored the ADIZ that they’ve put in place in the East China Sea."

China Deploys Fighter Jets to Contested South China Sea Island - Reports
The next day China's spokesman responded to Harris' announcement, saying that "The US military official seemed very busy these days … wherever he went, he kept talking about the South China Sea, smearing China's justified and reasonable actions there, sowing discord and making excuses for the US' exercise of hegemony and show of force in the South China Sea."

"However, a fallacy, repeated a thousand times, will not turn into truth. Facts are facts. China's reasonable deployment of limited defense facilities in the South China Sea is not 'militarization,'" Hun Lei said, denying the US claim.