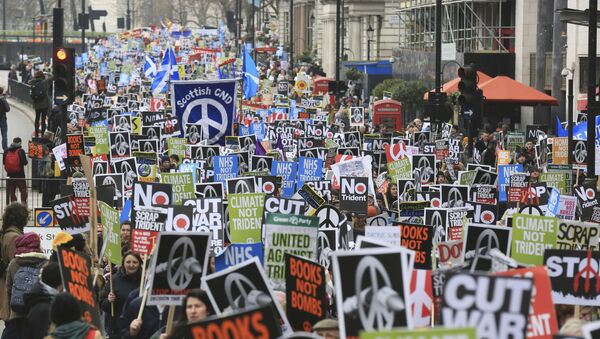 Political party leaders and anti-nuclear activists are rallying in London on Saturday to protest against the renewal of UK’s Trident nuclear program. Sputnik attended the demonstration and spoke to campaigners, who gathered in the capital for what is expected to be the biggest demo of its kind "in a generation".

People from all over the UK gathered in London to take part in the Stop Trident demonstration, organized by the Campaign for Nuclear Disarmament (CND).

Josh, a campaigner from the Youth and Student CND, told Sputnik:

"I am here because lots of money is being spent on nuclear weapons, which are weapons of mass destruction. We think that money can be better spent on building a better, greener future for young people across the world."

Another protester Ken told Sputnik that spending money on nuclear weapons is a waste.

"Spending money on war is a waste. It could be better spent on NHS and education. What is wrong with people? Why are we fighting wars? It is ridiculous. War, war, war – it is only to make money for the super rich."

Another campaigner at the rally told Sputnik: "In the modern world significant threats come from terrorists and rogue nation states, such as North Korea, who don’t really respect the mutually shared anti destruction principles. Multiple senior members of defense staff and former defense staff have also said that terrorists do not respond to the threat of nuclear weapons".

"In the modern world when our threats don’t come from a central nuclear power – it seems better that we invest money in some form of a defense initiative, rather than sticking to the outdated, outmoded, immoral and highly dangerous weapons system."

The First Minister of Scotland and the SNP party leader Nicola Sturgeon joined the rally, marching with the campaigners to Trafalgar Square in central London. 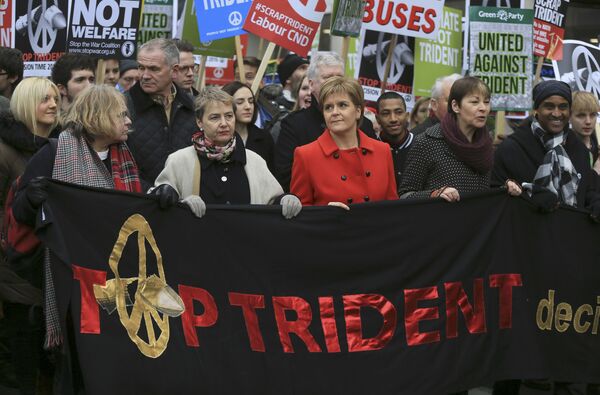 The leader of the Green Party, Natalie Bennett, has also joined the activists in their calls to scrap Trident.

As the march against Trident nuclear program arrived on Trafalgar Square in central London, the CND was showing footage of past demonstrations on big screens, while a parallel protest in support of refugees was also taking place.

CND’s general secretary Kate Hudson was the first one to give a speech at Trafalgar Square.

SNP's Sturgeon said in her speech to the protesters:

"I am so proud to be here today with so many from across Scotland showing solidarity with people across the UK and saying ‘no’ to the obscenity that is Trident nuclear weapons."

Britain’s nuclear-weapon submarine carrier Trident is planned to be renewed this year, if the Parliament gives its green light. While the upgrade would only affect the submarines  and not the actual nuclear missile, Stop Trident campaigners are seizing the chance to propose a total nuclear disarmament.

Anti-nuclear weapons activists point out that nuclear deterrents have been powerless to prevent many of the greatest tragedies to face the world in recent times such as 9/11, London's transport bombings and environmental hazards.

UK Labour party’s position has traditionally been in favor of maintaining nuclear deterrence. However, this now seems destined to change under the newly-elected leader Jeremy Corbyn, a longtime pacifist and anti-nuclear activist, and shadow defense secretary Emily Thornberry, who is an advocate of unilateral disarmament.

At the same time Corbyn’s anti-Trident stance is at odds with the Labour-supporting unions, who say any move to not replace the nuclear deterrent program will lead to the loss of thousands of jobs, with the Labour Party claiming 19,000 jobs depending on Trident in Scotland alone.

Politicians, including Plaid Cymru’s leader Leanne Wood, have underlined how the estimated refurbishing cost of £100 billion would be best invested in healthcare, education and welfare programs rather than in keeping the nuclear program alive.

Ms Wood said in a statement that nuclear weapons should belong to the "dustbin of history".