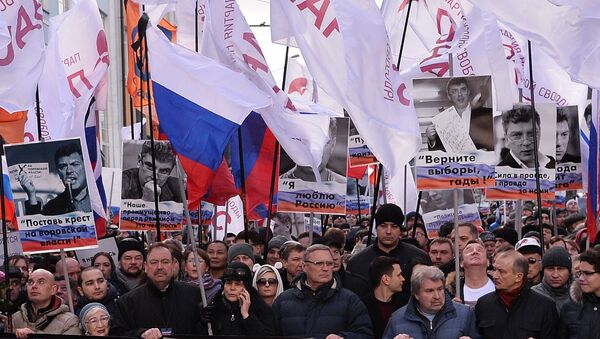 © Sputnik / Eugene Odinokov
/
Go to the photo bank
Subscribe
The Court of Moscow is due to consider a request from the investigation to extend the arrest of five suspects in the murder of Russian opposition politician Boris Nemtsov, according to a lawyer.

UK FCO Calls on Russian Gov-t to Bring Nemtsov's Murderers to Justice
MOSCOW (Sputnik) — The investigation has asked the Moscow City Court to extend the arrest of five suspects in the murder of Russian opposition politician Boris Nemtsov, a lawyer said Saturday.

"The Court of Moscow is due to consider a request from the investigation to extend the arrest of our defendants on March 1," Shamsudin Tsakayev told RIA Novosti.

Five people — Ramzan Bakhayev, Tamerlan Eskerkhanov, Shagit and Anzor Gubashev and Zaur Dadayev — were arrested in absentia a week after Nemtsov had been shot dead in central Moscow on February 27, 2015.

New Suspect in Murder of Russian Opposition Politician Nemtsov
The arrest of Eskerkhanov was extended to March 8, and of the other four suspects — to March 7, the judge of Moscow's Basmanny District Court said on February 19.

Initial investigative procedures in all the five cases have been completed, but the preliminary investigation period has been extended until May 28. After this date, the materials are expected to be sent to the prosecutor for approval of the indictment, and then to the court, for consideration on the merits.

February 27 marks the one-year anniversary of Nemtsov's murder. According to the reports, at least 7,500 people attended a Saturday march to commemorate the politician's memory in Moscow.

Nemtsov occupied a number of senior positions in the Russian government in the 1990s, and was an active opposition politician in the 2000s.