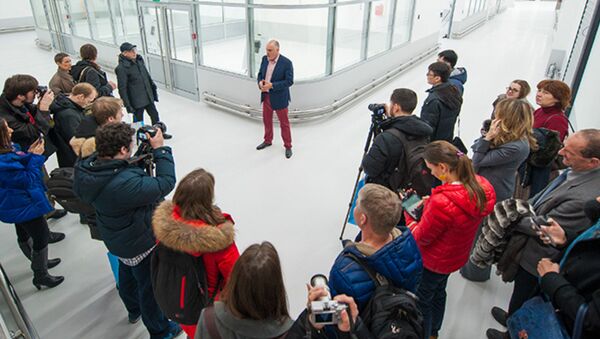 A unique new engineering center at Moscow's National University of Science and Technology MISiS is capable of building the next generation of complex machines and products explains the University Provost Alevtina Chernikova.

MOSCOW (Sputnik) — Moscow's National University of Science and Technology MISiS has finished construction of its Engineering Prototype Center that will start working in the autumn, University Provost Alevtina Chernikova told journalists on Thursday.

Hi-Tech Turns Fly-Tech: Russia Developing Hypersonic Flying Lab
According to its founders, the center will become a modern multi-role high-tech digital laboratory for the development and industrial design of functional prototypes for national and global industries.

The Engineering Prototype Center found its home at MISiS as the institution has recently become one of Russia's leading universities in the area of materials science, metals industry and mining, and also because it possesses the required infrastructure for undertaking complicated technical tasks, Alevtina Chernikova told journalists.

“Russian scientists are more frequently facing tasks on a national and global scale that require an inter-disciplinary approach, and no single laboratory can independently accomplish them. The infrastructure of our university will help scientists to accomplish this objective in cooperation with our foreign colleagues,” she said.

“Our efforts aim to enable the university to effectively respond to the challenges of the business community, to formulate its own research and academic agenda and, of course, to train experts who will work at such high-tech centers,” she said.

The center’s employees have already implemented a number of projects for leading national corporations, including a new-generation prototype spacecraft for the Korolev Rocket and Space Corporation Energia and new seating for cosmonauts in cooperation with the Zvezda Production Association, according to the Center’s Director and industrial designer who created the 2014 Sochi Olympic Winter Games torch, Vladimir Pirozhkov.

“A prototype is an object that did not previously exist. When a spacecraft, a car or a satellite is conceived, it needs to be built from scratch. Russia has always implemented these projects using the assets of private or state enterprise, but few of them can afford this. Therefore we have decided to establish a multi-sector venue where it is possible to make virtually any conceivable object. It appears that this center is unique in the world, at least for now,” he said.

The center’s director also noted the importance of merging professional education with production to the greatest possible extent, so that the graduates of technical universities will have no problems finding jobs.

“We have decided to adapt our students to the new reality. To do this, we have established partner-like relations with the Massachusetts Institute of Technology (MIT), and we are negotiating a joint applied MA program with several Italian universities. We also want our compatriots working abroad to be able to return to Russia and to work here. Our center will act like a ‘magnet’ for many scientists and engineers,” he stressed.

Cooperation With Russia 'Huge' Chance for Latin America to Boost High-Tech
The center has 29 pieces of state-of-the-art production equipment and machine-tools that can produce small batches of precision components that meet modern industrial design standards, as well as high-tech commercial products in line with modern industrial design standards. The center occupies 3,500 square meters.

The center’s cutting edge equipment will make it possible to calculate and build sophisticated functional digital systems for multiple sectors. The size of the output varies from one micron to 20 meters.

“Our center will become a ‘magic wand’ for scientists. If anyone is dreaming of creating an anti-gravitation technology or traveling through time, then he or she can try and accomplish this at our center,” Vladimir Pirozhkov joked.

The Engineering Prototype Center at the National University of Science and Technology MISiS was created with the support of the Russian Ministry of Education and Science and the Ministry of Industry and Trade.