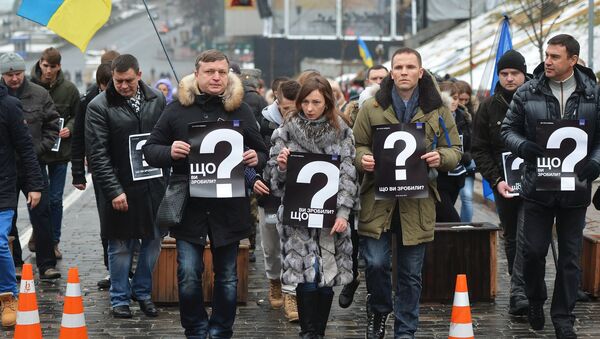 Two years on, it is obvious to almost everyone that the Maidan revolution was a pyrrhic victory, coming at a heavy material and moral cost and resulting in oligarchy, rather than freedom, prevailing in Ukraine, Spiegel Online laments.

"The mood in revolutionary Kiev in late February 2014 was one of euphoria," Spiegel contributor Moritz Gathmann, who reported from the Ukrainian capital during the 2014 protests, recalls.

Study Proves Maidan Snipers Were Western-Backed Opposition’s False Flag
"The victory, won after several weeks of street fighting, came with a bitter aftertaste," the journalist added. "Tens of thousands gathered in Independence Square to celebrate the overthrow of corrupted president Viktor Yanukovych. At the same time however, they carried dozens of coffins of the victims of those events from the square. The revolution claimed over a hundred lives, including at least 16 policemen."

"The victims were soon dubbed the 'Heavenly Hundred'. This was the high price for the victory, which gave [supporters] hope that this time, things would be different from the bloodless Orange Revolution of 2004. At that time, the victors soon began a campaign of trench warfare against one another. The people were disappointed, the country plunged into stagnation, and in 2010 the once-vanquished Yanukovych came back to the presidential palace."

Today, Gathmann notes, people are once again disenchanted in the promises of the revolutionaries. "'The Heavenly Hundred gave their lives for nothing' — this is a sentiment one hears in Ukraine these days. This is the disappointed commentary on the reality facing Ukraine."

Broken Promises: What 'Failing' to Oust Yatsenyuk Showed Ukrainians
"And the reality is such: a devastated economy and thriving corruption. And this despite the fact that Ukrainian politicians of all stripes continue, day after day, to speak about 'a European Ukraine, free of corruption'."

At the same time, Gathmann says, "the political parties formed after the revolution are a case of false labeling. The oligarchs continue to control groups of parliamentary MPs, their voices serving as the 'currency' with which their political business is paid for. This has been illustrated perfectly by the current parliamentary crisis."

"The West," for its part, "refused for a long time to call a spade a spade." After all, many argued, "Ukraine had been fighting against Russian-supported separatists, and for the preservation of its territorial integrity. However, the tough reaction by Washington, Berlin and Paris to the recent ministerial resignations indicates that two years on, the West's patience is at its end."

'Clean Up Your Act': Western Politicians Fed Up With Ukraine's Chaos
At the same time, however, "Western politicians do not get tired of calling for the 'strengthening of Ukrainian civil society'." The reality, Gathmann says, is that "Ukrainians themselves have to realize that this is not enough."

In contemporary Ukraine, "volunteerism flourishes, with hundreds of thousands of people helping soldiers at the front, sick children and the elderly. There are organizations involved in exposing corrupt officials and politicians, and in making critical evaluations of the reform process." By the same token, "there are also radical groups such as the Right Sector, which march through the streets, shout 'Glory to Ukraine' and threaten a new Maidan."

Ultimately, Gathmann writes, "volunteer culture is a continuation of the revolution by other means: the hundreds of thousands of people who came to the center of Kiev came not only to demonstrate. They made sandwiches, prepared tea, stood guard at night, threw Molotov cocktails and played music," all of which, the journalist says, was voluntary.

"But such voluntarism a state does not make. So long as parties, government institutions and television channels remain tools in the hands of oligarchs, the country will not change. Two years on, the political elite's memory of the Heavenly Hundred, and of the fact that the previous regime had to pack its bags in a panic and flee the country, is obviously no longer that fresh," the journalist concludes.