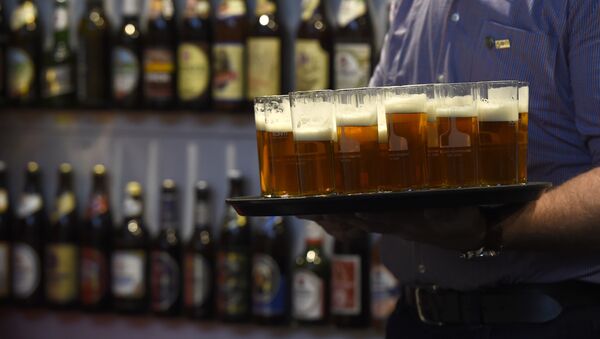 © AFP 2021 / TOBIAS SCHWARZ
Subscribe
14 popular German beers were found to contain glyphosate, it can be assumed some less widespread beer brands might also contain harmful levels of the chemical agent, according to the Munich Environmental Institute.

Licence to Drink: Germany Paying for Foreign Spies' Steins at Oktoberfest
MOSCOW (Sputnik) — Amounts of herbicide allegedly capable of causing cancer have been found in at least 14 popular German beer brands, a report by the Munich Environmental Institute found.

The German institution selected 14 brands of beer popular in the country, including Paulaner, Hasseroeder, Erdinger and Franziskaner, to search for traces of glyphosate, a chemical agent used to kill weeds.

It was noted in the report that because these 14 popular beers were found to contain glyphosate, it can be assumed some less widespread beer brands might also contain harmful levels of the chemical agent.

Americans With Herbicide-Linked Cancer File Lawsuit Against Monsanto
Glyphosate is one of the most commonly used herbicides in the world. Many crops are made resistant to glyphosate, through genetic modifications, to increase the effectiveness of weed control.

In March, the International Agency for Research on Cancer released a report, which concluded that glyphosate was a "possible human carcinogen" and could be treated as a dangerous substance. The conclusions were based on epidemiological studies, animal studies, and studies of cell tissue.