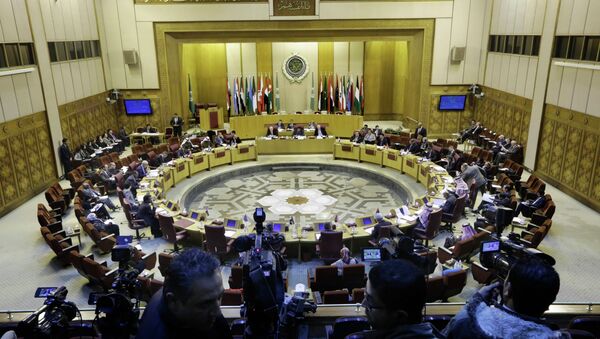 © AP Photo / Amr Nabil
Subscribe
Foreign Minister of the Untied Arab Emirates said that League of Arab States welcomes the recent Russia-US statement on a cessation of hostilities in Syria.

"We welcome the agreement between Russia and the United States regarding a cessation of hostilities in Syria. We believe that this is a step in the right direction, which will help move closer to a ceasefire and the end of the Syrian crisis," the minister said following talks with his Russian counterpart.

On Monday, Russia and the United States announced an agreement on the cessation of hostilities between the Syrian government of President Bashar Assad and armed opposition factions in the country. The agreement is set to come into force on February 27 at midnight Damascus time.

The UAE foreign minister is currently attending the third biannual Russian-Arab forum in Moscow. Top diplomats from the UAE, Jordan, Bahrain, Egypt, as well as the secretary general of the League of Arab Nations are participating in the event.

Discussions at the forum are expected to focus on strengthening ties between Russia and Arab states, as well as addressing the issues of the Middle East and Africa, including the fight against terrorism.

The League of Arab States expects the recent Russia-US statement on truce in Syria to lead to a larger ceasefire agreement, the organization's Secretary General Nabil Elaraby said Friday.

"We welcome these agreements and expect that they will transform into a ceasefire deal, monitored by the UN," Elaraby  told reporters.

000000
Popular comments
!! "lead to a larger ceasefire agreement"; 400,000,000 human beings will be happy if this happens, if I well understand this sentence.
elsa.zardini
26 February 2016, 13:36 GMT
000000
Thinking of it ........ Since 2011, with around 370 000 citizens dead in Syria and, according to an article in a local social democratic newspaper in Sweden, with over 30 000 missing, these numbers of causalities could be defined - in NATO terms as "collaborate damage". Although for an ordinary citizen, the number applied on a sovereign state like Iceland exceeds the whole population living there ........ So like, if so ........ .... Where would my brothers be ? Where would my cousins be? Where would my neighbours and their children be, or my neighbours' relatives? Where would the elderly be, those who once taught me the meaning of life .... Or the remote places of joyful meetings where the nature's resources shared their abundance of life; birds' sound in the air in harmony with the noisy water paving its way to the sea. Where would all this be?
ptcjm
26 February 2016, 14:11 GMT
000000
Newsfeed
0
New firstOld first
loader
LIVE
Заголовок открываемого материала
Access to the chat has been blocked for violating the rules . You will be able to participate again through:∞. If you do not agree with the blocking, please use the feedback form
The discussion is closed. You can participate in the discussion within 24 hours after the publication of the article.
To participate in the discussion
log in or register
loader
Chats
Заголовок открываемого материала
Worldwide
InternationalEnglishEnglishMundoEspañolSpanish
Europe
DeutschlandDeutschGermanFranceFrançaisFrenchΕλλάδαΕλληνικάGreekItaliaItalianoItalianČeská republikaČeštinaCzechPolskaPolskiPolishСрбиjаСрпскиSerbianLatvijaLatviešuLatvianLietuvaLietuviųLithuanianMoldovaMoldoveneascăMoldavianБеларусьБеларускiBelarusian
Transcaucasia
ԱրմենիաՀայերենArmenianАҧсныАҧсышәалаAbkhazХуссар ИрыстонИронауОssetianსაქართველოქართულიGeorgianAzərbaycanАzərbaycancaAzerbaijani
Middle East
Sputnik عربيArabicArabicTürkiyeTürkçeTurkishSputnik ایرانPersianPersianSputnik افغانستانDariDari
Central Asia
ҚазақстанҚазақ тіліKazakhКыргызстанКыргызчаKyrgyzOʻzbekistonЎзбекчаUzbekТоҷикистонТоҷикӣTajik
East & Southeast Asia
Việt NamTiếng ViệtVietnamese日本日本語Japanese俄罗斯卫星通讯社中文（简体）Chinese (simplified)俄罗斯卫星通讯社中文（繁体）Chinese (traditional)
South America
BrasilPortuguêsPortuguese
NewsfeedBreaking
08:06 GMTMen Sleep Worse During Waxing Moon, Women Unaffected – Study
07:58 GMTEmmy Awards 2021: Big Winners, 'Hollywood's Most Hated Man' and #SoWhite Controversy
07:30 GMTIndia: Uproar Over Arrest of BJP's Kirit Somaiya in Maharashtra For Accusing Minister of Corruption
07:10 GMTFinnish PM Embroiled in Product Placement Controversy Over Instagram Story
07:05 GMTEight Killed as Gunman Goes on a Shooting Spree at Russia's Perm University
06:27 GMTCanada Set to Deliver Verdict in Testy Vote as PM’s Cakewalk Becomes Nail-Biter
06:17 GMTTaliban Order Women Working in Kabul to Stay at Home, Interim Mayor Says
06:12 GMTSweden Raises Taxes to Finance Largest Military Investment in Modern Times
06:01 GMTBoJo Vows UK’s ‘Ineradicable’ Love of France in Bid to Mend Fences Amid Diplomatic Row Over AUKUS
06:00 GMTBritain Considers Offering Loans to Energy Firms Amid Dramatic Hike in Gas Prices - Report
05:29 GMTRussia’s Ruling Party Ahead in Parliamentary Vote With Over 48%, Election Commission Says
04:34 GMTLive Updates: UK PM Johnson to Push Joe Biden to Lift COVID-19 Travel Ban With US
04:30 GMTNot in the Mood: Golden Retriever Does Not Want to Cuddle
04:28 GMTChinese Observers Give Positive Assessment of Russian State Duma Election
03:45 GMTMusk Adds Another Joke to Joe Biden’s ‘Sleepy’ Issue, When Asked About ‘Inspiration4’ Flight
03:16 GMTKhamenei Appoints New Head of Iranian Air Force
03:16 GMTWait, Again? New Photo of Trudeau Wearing Blackface Emerges on Social Media
02:41 GMT‘Duty of Care’: Texas Doctor Performs Abortion Past 6-Week Law to Protest State’s ‘Heartbeat Bill’
02:02 GMT'Get Off Back Foot': Prince Andrew Mulls Dismissing His Legal Team Over Reputational Damage - Report
01:48 GMT'The Crown' Wins Emmy for 2021 Best Drama Series