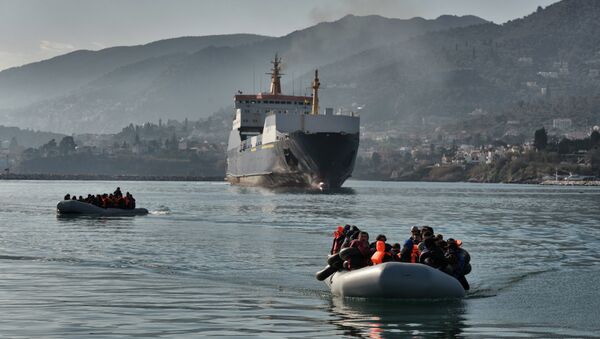 NATO's operation in the Aegean Sea aimed at monitoring of the migration flows to Europe is on the verge of failure because of differences between Turkey and Greece. In an exclusive interview with Sputnik political expert Dr. Celalettin Yavuz commented on the issue.

At Least 42 Migrants Die Trying to Cross Into Greece in Aegean Sea
Greece accuses Turkey of its unwillingness to fulfill the conditions of the signed agreements and blocking the NATO operation. Turkey has not yet replied to the accusations, but the expert community of the country is opposed to the idea of foreign military forces monitoring Turkey's territorial waters.

It remains unclear how a NATO naval group is going to carry out its operation in the Aegean Sea in such conditions. Moreover, many wonder why Turkey initially agreed to let NATO military ships in the waters of the Aegean Sea, and is now putting obstacles in their way.

"Even before the NATO monitoring operation in the Aegean Sea, I said that it will be impossible to implement the Turkish-German ideas into practice," former captain of the Turkish Navy and prominent political expert Dr. Celalettin Yavuz told Sputnik. "Their entry into the demilitarized zone would mean a violation of the Treaty of Lausanne."

The Treaty of Lausanne was signed on July 24, 1923 and officially stopped the conflict between the Ottoman Empire and a number of countries including Britain, France and others and formed the current status quo. According to the treaty, a number of islands near Anatolia were given a special demilitarized status, which means that this zone must remain uninvolved in any military activities.

"In such circumstances, any NATO naval group will inevitably come to a standstill in the Aegean Sea since it would be possible to catch only those illegal immigrants outside the territorial waters of the demilitarized islands," the expert said.

Amid a major migrant crisis in Europe, NATO Secretary General Jens Stoltenberg earlier announced on Thursday plans to deploy warships in the Aegean Sea to combat migrant trafficking into the European Union. NATO ships are expected to patrol the maritime border between Turkey and Greece in a bid to control the refugee inflow to the bloc, according to the alliance.