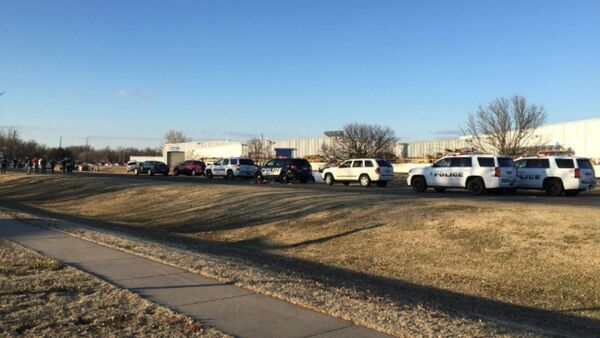 An active shooter situation has been reported at Excel Industries, near Wichita, Kansas, leaving four people dead and as many as 14 people injured across multiple crime scenes.

The incident occurred in Hesston, Kansas, roughly 40 miles north of Wichita. Harvey County Sheriff T. Walton said at a news conference late on Thursday that there were four dead in the shooting, including gunman. The Sheriff has also reported that 14 people were injured, they are now receiving treatment in a hospital and 5 of them are in critical condition.

According to Walton, the Thursday shootings occurred at several locations – the gunman fired from his vehicle before driving to Excel Industries in Hesston, Kansas, where he worked. He was killed in a shootout with police at his workplace.

The shooter, identified by employees and eyewitnesses as 38-year-old Cedric Ford, was reportedly armed with an AK-47. Witnesses described the suspect vehicle as a grey and red pickup truck. Also he had a criminal history in Florida with multiple burglary and other convictions between 1997 and 2000.

The crime scenes include inside the Excel facility, in the plant's parking lot, another location in Hesston, and the nearby town of Newton.

A number of federal agencies are on the scene, including the ATF and FBI.

An area college remains on lockdown as a safety precaution.

Excel Industries specializes in lawn care equipment and is based in Hesston.