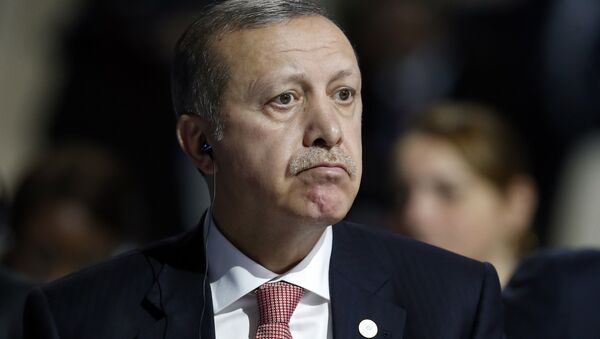 Washington has set a trap for impulsive Turkish President Recep Tayyip Erdogan, US journalist Mike Whitney notes, adding that a 'color revolution' in Turkey may one day become a reality.

On February 19 Washington dismissed a draft resolution by Russia aimed at preventing a Turkish invasion of Syria at the United Nations Security Council (UNSC); by making move the Obama administration is in fact giving the green light to Ankara's ground operation in Syria, US independent journalist Mike Whitney believes.

"It suggests that the Obama administration thinks that Turkish ground troops could play an important role in shaping the outcome of a conflict that the US is still determined to win. Keep in mind, if the resolution had passed, the threat of a Turkish invasion would have vanished immediately," Whitney writes in his analysis for CounterPunch.org, adding that the quashing of the resolution clearly signals that Washington does not want peace in Syria.

Aleppo Advance: How to Defeat Daesh and Avoid New World War
Although it is believed that Recep Tayyip Erdogan has "dictatorial powers" and can launch the much-discussed ground operation in northern Syria whenever he wants, it is not true: Turkish generals do not want to bear the responsibility for invading a sovereign state. Therefore, Ankara is seeking either US/NATO or the UN's blessing, the journalist explains.

Meanwhile, Ankara continues to wage a covert war against Syrian Kurdish militias by shelling northern parts of Syria and giving Sunni jihadists, fighting against the YPG (Kurdish People's Protection Units) forces and the Syrian Arab Army, a free pass to cross the Turkish-Syrian border and re-enter the war zone.

Whitney underscores that the Obama administration is fully aware of what is going on. However, while admonishing the Erdogan government for shelling northern Syria, Washington has vocally recognized Turkey's "right to defend itself."

"This alone speaks volumes about the duplicity of Washington's approach," Whitney notes. 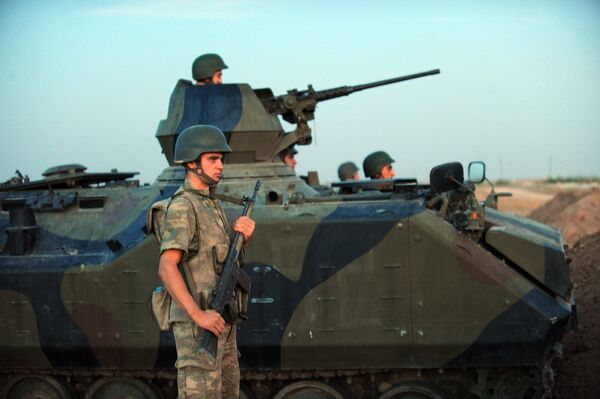 According to the journalist, there is something very fishy about the White House indulging Ankara's warmongering.

On the one hand, Washington is indirectly pushing the impulsive Turkish President toward a military conflict with Moscow and Damascus in Syria thus upsetting the Russo-Syrian successful operation. On the other, a Turkish invasion would aggravate domestic tensions inside Turkey.

"A Turkish invasion would exacerbate divisions inside Turkey seriously eroding Erdogan's grip on power while creating vulnerabilities the US could exploit by working with its agents in the Turkish military and Intel agency (MIT)," Whitney writes.

"The ultimate objective would be to foment sufficient social unrest to incite a color-coded revolution that would dispose of the troublemaking Erdogan in a Washington-orchestrated coup, much like the one the CIA executed in Kiev," he stresses.

Does Kerry's 'Plan B' on Syria Originate From 2008 Secret US-Saudi Plan?
American researcher, historian and strategic risk consultant F. William Engdahl shares the similar stance. The historian has repeatedly warned that Washington's cunning geostrategists have set a trap for both Erdogan and King Salman in Syria and Iraq.

"While the only-too-clever Prince Salman and Erdogan are convinced, by all the soft, subtle encouragement from John Kerry, from Joe Biden and those in Washington that they have a green light to invade and take over the rich oil and gas fields of Syria and of Turkey's next-door neighbor Iraq and its huge Mosul oil riches, in fact they are about to fall into a horrendous trap," Engdahl writes in his article for New Eastern Outlook.

As a result, "the trap will likely see the map of the entire Middle East redrawn fundamentally for the first time since the secret… Sykes-Picot Plan," the historian stresses.

And there is a good reason to think such a trap is not a "conspiracy theory."

Daesh Terrorists: A Multifunction Tool in Hands of Ankara, Riyadh, NATO
Whitney draws historic parallels between the ongoing Syrian conflict and the Gulf War of 1990-1991.

Incredible as it may seem, it was US Ambassador to Iraq, April Glaspie, who gave Saddam Hussein the nod to invade Kuwait in 1990.

However, "the Iraqi Army had barely reached its destination before the US launched a massive military campaign (Operation Desert Storm) that forced Saddam to speedily withdraw along the infamous Highway of Death," the journalist narrates, adding that it was the first phase of Washington's plan to overthrow Hussein and replace him with a pro-Western stooge.

It seems Erdogan is walking straight into a similar trap.