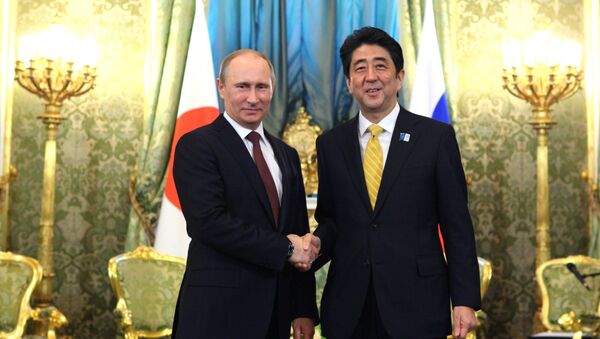 Japan's Abe Brushes Off Obama's Request to Cancel May Visit to Moscow
Earlier, during a telephone conversation with Abe, US President Barack Obama asked him to refrain from visiting Russia in May, but the Japanese politician has refused his advice. In some media, this move has almost been regarded as a sign of a Japanese rebellion against the dictatorship of the United States.

However, according to Panov, Japanese authorities on the contrary stick to a very "balanced" position. On the one hand, they are planning Abe's trip to Russia, and on the other they are coordinating their efforts with the US and other Western countries.

"On the one hand, Abe is preparing for his visit to Moscow, on the other he is trying to sooth his partners saying that it [the visit] won't cause serious damage to a common position of G7, especially regarding Ukraine," the expert said.

Japanese Government Denies Abe Cancelled Russia Visit
Panov argued that Abe's visit to Russia is most likely to take place as planned. According to him, both parties may be interested in discussing bilateral economic cooperation.

"Maybe it is not a coincidence that the restrictions on the acquisition of controlling stakes in a number of Russian hydrocarbon deposits by Japanese companies are announced to be removed," the expert said.

"Japan asked for this for a long time, but Russia did not go for it and made exceptions only for China. Now it will be possible to find a formula of Japanese participation in such projects, in spite of the sanctions," Panov explained.

Regarding the resolution of a long-standing dispute between Russia and Japan over four Pacific Ocean islands, the expert, however, remained skeptical.

"The parties stick to the same positions. The Russian side proceeds from the fact that the ball is on the Japanese side, and Japan should offer some sort of compromise," the expert concluded.