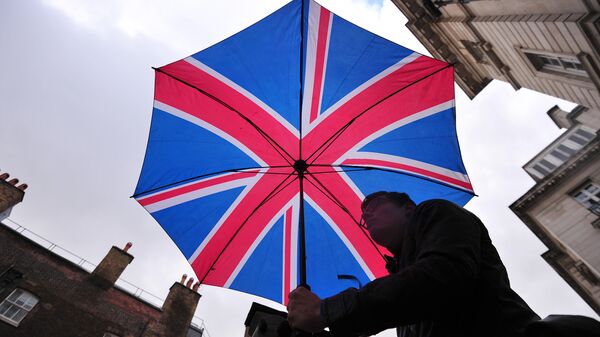 Finian Cunningham
All materials
For many European citizens, the 28-member-state Union has turned out to be a huge disappointment. It is far from the progressive, socialist bloc that many had once envisaged.

Brexit Fears Stir Devaluation Risks, London’s Downfall
One of the reasons for the EU’s historic failure is Britain. Ever since the United Kingdom joined the European project, it has been a largely negative force, carping about workers’ rights, equality laws and the principle of inter-state solidarity. Now it is to vote on whether to finally leave the Union – the so-called Brexit.

When Britain first applied to join the then six-member European Economic Community back in 1963, it was rejected by co-founder France under President Charles De Gaulle. De Gaulle’s shrewd reasoning was reportedly that “the British are fundamentally hostile to the European initiative”.

With the French leader later out of office, Britain finally got its way and acquired membership in 1973.

But you would wonder why it ever wanted to join? For in the more than four decades of membership, Britain has been running a continual battle of dissent against Brussels, the Belgian capital where the bloc’s administration is centered. The EEC has since evolved into the European Union which now comprises 28 states.

UK Defense Secretary Says ‘Brexit’ is 'Big Gamble' for British Security
British complaints towards the EU have always been most vocal from its pro-business, rightwing Conservative party, which tends to be the more dominant governing party. A recurring protest from the Tories is that British sovereignty is being undermined by the plurality of European states.

Britain, it seems, wants to be part of Europe for partial economic benefits, but when it comes to any other issue, London has always wanted to go it alone. Britain didn’t join the single currency system, and it was never part of the passport-free travel arrangement that most of the EU have participated in. It wants special exemptions for the City of London as a free-wheeling financial centre, and, as shown in Prime Minister David Cameron’s latest deal with Brussels, Britain has arrogated a new raft of “opt-out” privileges, giving it a “special status” within the EU.

This British dissent has been a hallmark under avowedly socialist Labour governments too, albeit less vituperative, which shows that there is something inherently frigid about Britain towards Europe. De Gaulle was right after all, it seems, in his assessment that British rulers were congenitally hostile to all things European.

Britain’s malign influence on the EU’s development is perhaps best seen in the area of foreign policy, and in particular in its subservience towards Washington. Europe has shown itself to be nothing more than a collection of vassal states that kowtow to American demands.

Rather than pursuing an independent, critical stance on world affairs, the EU is just a pathetic branch of Washington’s global reach.

A classic illustration of this obsequious syndrome is the impasse over the past two years with Russia. Instead of growing as natural partners with Russia, Europe is in throes of a bizarre standoff. This is because Washington has accused Russia under Vladimir Putin of all sorts of ridiculous transgressions, including being a threat to European security, and the EU unblinkingly follows the Americans.

How the US Runs the EU
Many European citizens, workers and businesses do not agree with this demonization of Russia. Indeed, they see it as a travesty and a reckless drive to war.

Yet the EU leadership has toed Washington’s belligerent line towards Moscow and adopted a host of self-defeating economic sanctions. These sanctions have hit European citizens much harder than Americans. But the EU in its subordination to Washington persists with this futile and unnecessary hostility toward Russia.

This irrational deference to the US by the EU can be traced to Britain’s ardent Atlanticist affiliation. Notice that in the confrontation over Ukraine, for example, it is Britain that typically echoes Washington’s hardline on Moscow, which has the effect of cohering the other EU governments behind a US-British spearhead.

What the Americans and British call the “special relationship” is really this: British governments perform as Washington’s stalking horse in Europe.

Britain’s function was spelled out in a recent article by Richard Haass, who is president of the influential Council on Foreign Relations, based in Washington. On the possibility of Britain leaving the EU, Haass said it was “highly undesirable”. He wrote: “One reason why the US values its ties to the UK as much as it does is the UK’s role in Europe. Britain is important not just as a bilateral partner, but because more often than not it can be counted on to argue for and support positions in Brussels consistent with, or at least not far from, those of the US.”

Put another way, if Britain were not a member of the EU, then Washington’s influence on European policies would be greatly diminished. And that is why Washington is now urging Britain to remain within the Union as the forthcoming British referendum on its future with the EU looms on June 23.

US Wants to Keep Britain in EU to Offset Continental European Powers
There are many other illustrations of how Britain has served as Washington’s malign surrogate in shaping the EU to conform with its geopolitical ambitions. One is how Britain is a staunch supporter of the US-led NATO military alliance. Disturbingly for independent-minded Europeans, the EU has almost become a clone of NATO. Most of the alliance’s 28 members are European. And it is Britain that has eagerly pushed for its expansion into eastern Europe, with bogus jingoistic claims that Russia poses an existential threat.

Then there is America’s rampage of illegal wars for regime change over the past two decades. In every one of these, from Iraq to Afghanistan, from Libya to Syria, Britain has ridden shotgun with its American boss. This British complicity has, in turn, contaminated Europe with Washington’s global criminality. And bequeathed Europe the fallout from these wars, in the form of terrorist blowback and an unprecedented refugee crisis.

Of course, it is not all Britain’s fault. European leaders like Germany’s Angela Merkel and France’s Francois Hollande have shown odious servility towards Washington in relation to Russia. Europe needs to grow a political backbone.

Nevertheless, it seems fair to say that Europe would be a far more progressive and constructive, independent power were it not for Britain’s continual dragging it back into a reactionary, pro-Washington fold.

The EU has indeed gone badly awry from the vision of a democratic, independent confederation. It has become, perhaps irredeemably, a vassal of American one-percent-type capitalism and warmongering imperialism. Maybe the people of Europe need to break up this lily-livered leviathan and to rebuild again.

One start to reconstructing a new Europe would be for Britain to exit. How can a viable Europe be ever built with such a delinquent force in its midst?

Forget Brexit, Grexit: EUexit on Cards Amid Rising Euroskepticism
A so-called Brexit may herald the break-up of the EU as we know it. That’s not necessarily a bad thing as the EU has lost its way over many years. A shake-up is long overdue right down to the core.

Paradoxically, carping old Britain, by leaving, may actually do Europe a favor in that it will presage a proper reconstruction of the EU – one that is independent in foreign relations and not just a lapdog to Washington. And in this new EU, Britain would be excluded.

So, let’s have a Brexit. And good riddance!