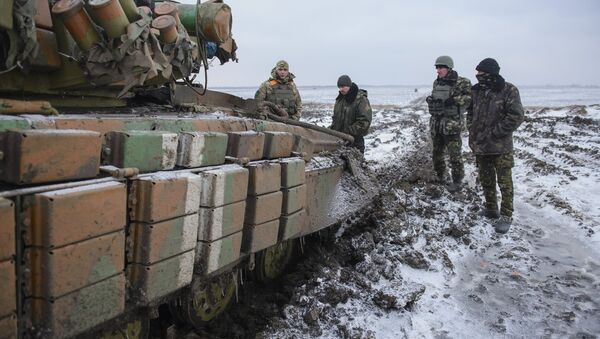 The Contact Group on Ukraine is discussing a possible ban on firing drills within 15 km (9 miles) on both sides of the contact line in Donbass region, Russian Contact Group envoy Boris Gryzlov said Wednesday.

Withdrawal of Arms From Line of Contact in Donbass to Consolidate Truce
MOSCOW (Sputnik) — Ukraine’s eastern Donetsk and Lugansk regions have been targeted by Kiev's military operation since April 2014, after local residents refused to recognize the new Ukrainian government, which came to power as the result of a coup.

The OSCE monitoring mission was deployed to the eastern Ukraine to observe the implementation of peace agreements reached by the two sides in the Belarusian capital of Minsk with mediation by Russia, France and Germany first in September 2014 and then in February 2015.

"The second agreement [under discussion] is on banning firing drills within a 15 km zone from the contact line. It is known that such shootings often provoke fire from the other side, especially at night," Gryzlov told reporters.