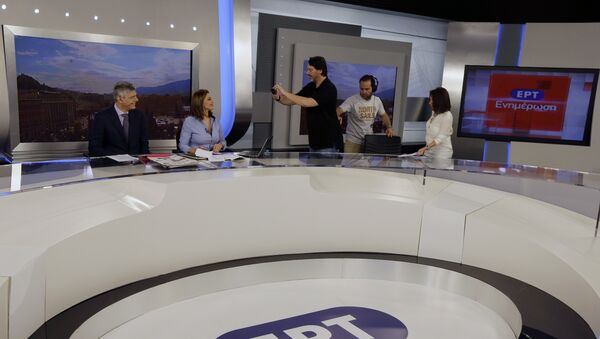 The Greek anarchist group Rubicon stormed the building of the ERT public broadcaster during a live news broadcast, the company's employees said.

Greek Finance Minister Insulted by Anarchists at Restaurant in Athens
MOSCOW (Sputnik) — The employees told RIA Novosti that the programs broadcast on Tuesday, which marks the 50th anniversary of the beginning of television broadcasting in the country, was interrupted for eleven minutes after about 20 people forced their way into the building.

According to the employees, the anarchists demanded some text be read on air before proceeding to clash with some of the journalists, wounding one of them. Police detained the anarchists and transferred them to Attica Police Department.

The Rubicon group previously carried out a number of similar attacks on Greek state bodies. In March 2015, members of the Rubicon group seized an office belonging to Greece's ruling Syriza party. In November 2015, the group attacked the German ambassador's residence in Athens.