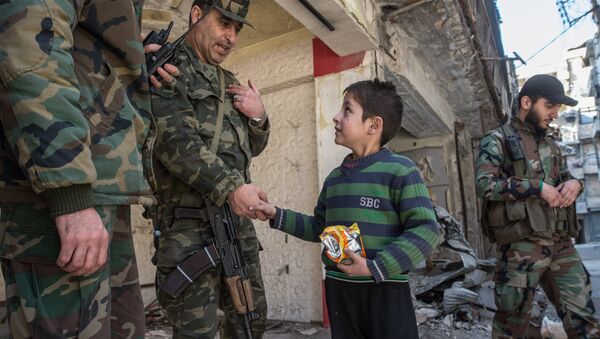 © Sputnik / Iliya Pitalev
/
Go to the photo bank
Subscribe
The US media coverage of the Syrian war is completely divorced from reality, award-winning American author and foreign correspondent Stephen Kinzer writes, adding that much of the US press is reporting the opposite of what is actually happening on the ground.

Americans have almost no real information about what is going on in Syria, and much of the blame for this lies with US mainstream media, award-winning US author and foreign correspondent Stephen Kinzer stresses.

"Coverage of the Syrian war will be remembered as one of the most shameful episodes in the history of the American press," Kinzer writes in his article for The Boston Globe.

Breakthrough: US, Russia Agree on Syria Ceasefire Starting February 27
"Americans are being told that the virtuous course in Syria is to fight the Assad regime and its Russian and Iranian partners. We are supposed to hope that a righteous coalition of Americans, Turks, Saudis, Kurds, and the 'moderate opposition' will win. This is convoluted nonsense, but Americans cannot be blamed for believing it," the journalist underscores.

Incredible as it may seem, the American mainstream media is reporting quite the opposite of what is really happening on the ground.

To illustrate his statement Kinzer refers to the Aleppo takeover.

"Many news reports suggest that Aleppo has been a 'liberated zone' for three years but is now being pulled back into misery," the journalist notes.

But the stark reality is that the city has been run by violent Islamist militias, including al-Qaeda affiliate al-Nusra Front and Daesh fighters backed by Turkey and Saudi Arabia. They terrorized the locals, destroyed factories and smuggled the stolen machinery to Turkey.

​In light of this the Russo-Syrian offensive was regarded as the only hope by the civilians.

Kinzer quotes Beirut-based analyst Marwa Osma who posed the rhetorical question: "The Syrian Arab Army, which is led by President Bashar Assad, is the only force on the ground, along with their allies, who are fighting ISIS [Daesh] — so you want to weaken the only system that is fighting ISIS?"

What is a "mainstream rebel"…? pic.twitter.com/MpKUrgs25y

​Meanwhile, Washington-based journalists are convincing the US public that al-Nusra, is comprised of "rebels" or "moderates," remaining mute that the infamous group is the local al-Qaeda franchise.

US asked Russia to stop bombing Al-Qaeda, because the "moderate" rebels are among them. pic.twitter.com/VDsASJkhA6

​Much in the same vein, Saudi Arabia and Turkey are being described. The US media turn a blind eye to the fact that Riyadh and Ankara have been arming and funding foreign jihadists in Syria. The story of Turkey's suppression of Kurds also remains largely untold.

In contrast, "everything Russia and Iran do in Syria is described as negative and destabilizing, simply because it is they who are doing it — and because that is the official line in Washington," Kinzer stresses.

​According to Stephen F. Cohen, professor emeritus of Russian studies at New York University and Princeton University, the US influential party of war and its counterparts in NATO are fanning the flames in order to get rid of Bashar al-Assad.

Daesh Terrorists: A Multifunction Tool in Hands of Ankara, Riyadh, NATO
"On the issue of who should do and can do the fighting [in Syria] I always believed and in fact the retired chief of the British general staff Lord [Richards] said… that there is only one real fighting force — the Syrian Army. Therefore Obama's plan to get rid of Assad which would risk the stability of the Syrian state and thus the Syrian Army, as happened when they got rid of Gaddafi in Libya, was a mistaken policy," the American academic said in an interview on The John Batchelor Show.

The academic believes that there is actually a plan for invasion of Syria by Turkish-Saudi forces. The question remains open whether or not Washington policymakers will authorize the ground military campaign.

The Saudis and Turks are going to Syria to combat ISIS and of course by ISIS they mean Kurds and Assad.

​Washington wants to maintain "leadership" in the Middle Eastern region. In this context the success of the Russo-Syrian military campaign obviously contradicts the US war party's agenda.

"Politicians may be forgiven for distorting their past actions. Governments may also be excused for promoting whatever narrative they believe best suits them. Journalism, however, is supposed to remain apart from the power elite and its inbred mendacity," Kinzer believes.

000000
Popular comments
The American public have always required spoon feeding, and reject anything that remotely portrays their 'greatness' as anything less. Apparently the sun only goes from the east coast to the west coast. The entire 320 million population IS the entire world, and their military should never be on their knees with hands on head. USA is God's chosen mixed bred people, and he will bless them with prosperity and long healthy lives at the top of the dung heap........so they keep saying.