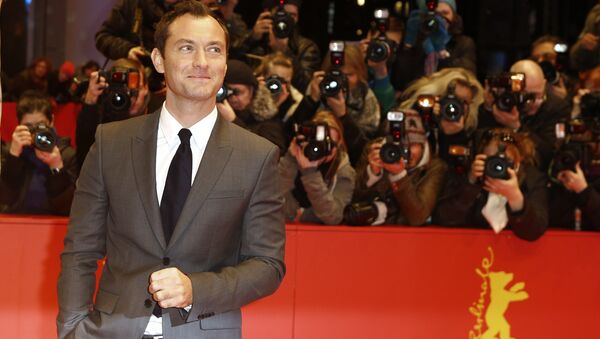 British actor Jude Law and singer Tom Odell visited the Jungle camp in Calais to campaign for the fate of refugees living there.

Besides Law and Odell, over 100 celebrities have signed an open letter to British Prime Minister David Cameron urging him to step in and prevent the French government from demolishing the Calais refugee camp in Northern France.

British actor Law, best known for the movies Enemy at the Gate, Closer and Grand Budapest Hotel, among others, came to see conditions at the Calais refugee camp and urge the British government to take in kids and teenagers who already have relatives in Britain.

​"Who knows what's going to happen to them?" — Law said, as cited by Euronews.

​"It is a community that they built and it offers a minor thread to the children who are here unaccompanied. Without those who knows what's going to happen to them," Law said.

​Last week, French authorities issued an order under which refugees have to leave the Calais camp by 8 PM local time Tuesday. The French police promised to clear the camp of makeshift dwellings and forcibly remove any refugees who would refuse to leave the area.

Refugees Must Leave Calais Camp by Late Tuesday - Reports
Thousands of undocumented migrants have been camping out rough for months on the outskirts of Calais. They seek to enter the United Kingdom either by sea or through the Channel Tunnel.

Europe is currently struggling to cope with a massive refugee influx, with hundreds of thousands of refugees fleeing conflict-torn countries of the Middle East and North Africa in search of asylum in wealthy European states, such as the United Kingdom.