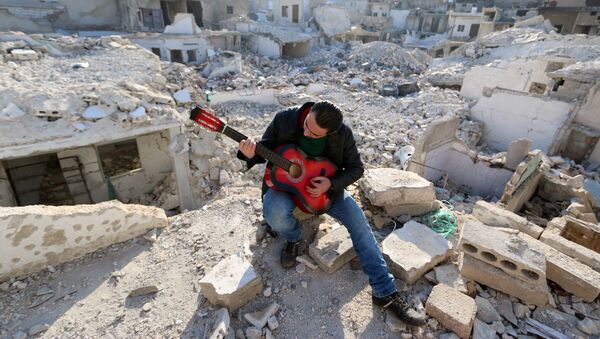 The Russia-US deal on Syria ceasefire is a small but important milestone on the way to end hostilities in the war-torn country, the success of which largely relies on the international community, experts told Sputnik on Tuesday.

MOSCOW (Sputnik), Alexander Mosesov — On Monday, Moscow and Washington announced an agreement on cessation of hostilities between the Syrian government of President Bashar Assad and the armed opposition factions had been reached. The agreement will come into force on February 27.

"The agreement seems to be an important milestone since any form of compromise from either the government or the opposition has been so far from reality throughout this conflict. However, it's not perfect," Renad Mansour, Carnegie Middle East Center fellow said.

According to Mansour, the deal does not necessarily mean a cessation of violence in Syria, as some extremist groups, such as Daesh, may continue fighting and instigating violence.

Arab League Calls on All Sides in Syria to Adhere to Ceasefire – Statement
The other issue that the expert pointed out is that popular Kurdish group Democratic Union Party (PYD) has also been left out of the negotiations due to Turkey's refusal to allow it to be at any of the talks. Given the tensions between Ankara and the PYD, which is considered to be a terrorist-affiliated group in Turkey, "violence may continue between the two and spill into Syria," Mansour, who is also a former adviser to Iraqi Kurdistan’s regional government, said.

"ISIL will seek to provoke the regime and other partners to ensure that the ceasefire or political developments are thwarted. The international community needs to make continue working with their various proxies to ensure that violence does not re-start due to provocations," the expert added.

According to Mansour, the international community needs to properly consider such questions as "what will happen to the regime or what will a transition look like more specifically."

Step Forward: Gorbachev Praises Russia-US Deal on Syrian Ceasefire
Chris Doyle, Director of the Council for Arab-British Understanding (Caabu), also said that the success of the ceasefire deal depends on the international community. More specifically, it relies on whether and to what extent the international community is ready to transform the deal into a "properly functioning national ceasefire," which should have inspection and monitoring systems.

So far, the reputation of ceasefires in Syria, which have rarely been observed for a significant time, "has not always been positive," Doyle added.

"Given the lack of trust, the fears and the previous failures, it’s difficult to be overly optimistic but it [the deal] is a small micro step in that direction if there is a secession of hostilities implemented," Doyle said.

He added that the outlawed by Russia and the United States Daesh and al-Nusra extremist militant groups, which have been excluded from the ceasefire deal, "both have a distinctive spoiler role in this."

Kerry: Parties of Syrian Conflict Must 'Work Out' Modalities of Ceasefire
According to Doyle, Jabhat Al-Nusra could be a "much more difficult issue long-term," as the group is "far more embedded within areas where more nationalist opposition finds themselves," making it difficult to separate them from the opposition groups.

The United States and Russia co-chair the International Syria Support Group (ISSG), a diplomatic grouping under the auspices of the United Nations. The 17 ISSG members met in Munich earlier this month and agreed on a temporary pause in hostilities in Syria.