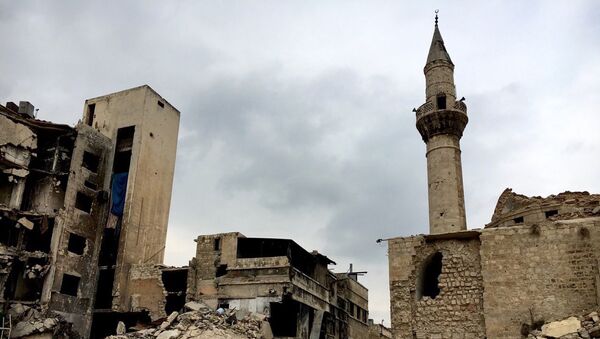 WASHINGTON (Sputnik), Anastasia Levchenko — Ottawa welcomes the US-Russian plan on cessation of hostilities in Syria and hopes it would lead to the resumption of peace talks to settle the ongoing civil war, Canada's International Department told Sputnik.

On Monday, US Secretary of State John Kerry and Russian Foreign Minister Sergei Lavrov announced an agreement of cessation of hostilities starting February 27 between the Syrian government of President Bashar Assad and a host of rebel groups has been reached.

"Canada supports the recent progress towards a ceasefire in Syria and calls on all parties to commit to the common goal of relieving the suffering of the Syrian people. We hope that this outcome, agreed to by both co-chairs of the International Syria Support Group, will provide an opportunity for peace talks to resume," a spokesperson for Global Affairs Canada said.

The spokesperson added that the Syria-led political transition would be the best way to a lasting solution ‎that would settle the long-standing conflict and relieve the suffering of civilians in the region.

"Canada stands ready to support the Syrian people in their efforts to secure a future that is peaceful and respectful of the rights of all of its citizens," the  spokesperson said.

Syria Ceasefire Deal Shows Russia, US Able to 'Reformat Int'l Relations'
Under the deal, all parties which agreed to the conditions of the ceasefire, must announce their acceptance of the terms for the cessation of hostilities by February 26. The Syrian army, its allies, Russia and the US-led international coalition will continue launching airstrikes against terrorist groups.

Syria has been in a state of civil war since 2011, with government forces fighting numerous opposition groups and extremist organizations.

Following the Monday announcement, the Syrian leader issued a decree calling for legislative elections in the Arab republic to be held on April 13 this year.