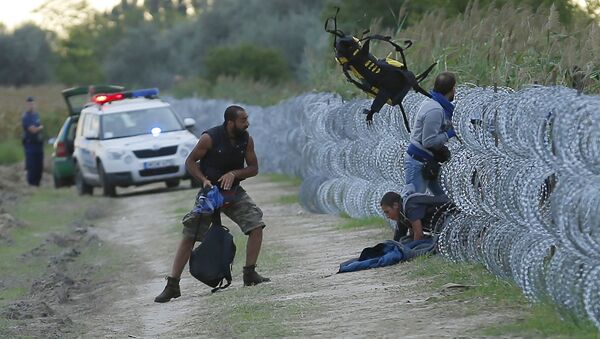 © REUTERS / Laszlo Balogh
Subscribe
Failing to recognize the full extent of the ongoing refugee crisis, the European Union (EU) has failed to stand up to its own ideals, bringing an end to the Schengen Area, French political analyst and author Maxime Tandonnet wrote for Le Figaro.

The EU was essentially built on two major principles — the single currency and free movement of people under the Schengen Agreement. And now one can effectively say that Schengen, one of the pillars of the EU, is "dead," Tandonnet said, according to Le Figaro.

The influx of refugees from the Middle East and North Africa in 2015 has caused turmoil in Western Europe and is expected to bring some monumental changes on the continent, the author argued.

"This gigantic construction [Schengen] is quickly disintegrating under the impact of current events," Tandonnet explained, citing how a number of EU-member states have thrown the idea of free movement of people out of the window and have begun checking documents at border control areas.

When faced with the migrant crisis in 2015, the EU chose to let everyone in, promising to re-settle all refugees across the entire union based on the system of quotas.

Fall of Schengen and Border Controls Would Cost Europe US$120bn
The worst thing is that the collapse of Schengen likely won't resolve the refugee crisis. It will only temporarily block asylum seekers in Greece and Italy, leaving these two countries alone with their fate, the French expert said.

As time passes and with no political solutions found, the situation on the continent will only get worse. As a result of the refugee crisis, right-wing extremism is on the rise everywhere on the continent, Britain might exit the EU, while Greece has been made a scapegoat for all the problems, being accused of not being able to control its border.

"There is a real risk of the political destabilization of Europe and the return of nationalist regimes," Tandonnet said, as quoted by Le Figaro.

The European Union is currently struggling to manage a massive refugee crisis, with hundreds of thousands of people fleeing conflict-torn countries in the Middle East and North Africa. The EU border agency Frontex recorded more than 1.8 million illegal border crossings in the EU in 2015.

000000
Popular comments
"hundreds of thousands of people fleeing conflict-torn countries in the Middle East and North Africa" Tell me more about the wars in Eritrea, Iran, Pakistan, Tunisia, Morocco or Algeria?