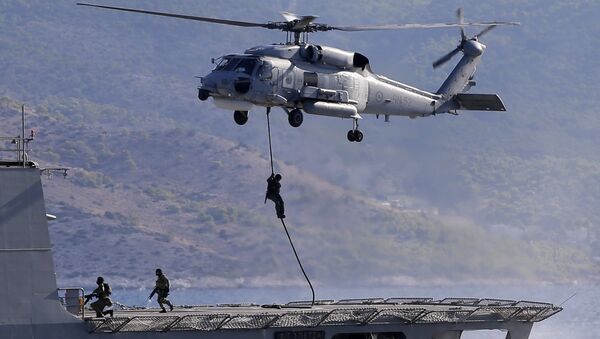 NATO have launched anti-submarine exercises in the Mediterranean Sea.

How the US Used NATO to Turn Western Europe Into Washington's Vassals
WASHINGTON (Sputnik) — Eight NATO member states have launched anti-submarine warfare exercises in the Mediterranean Sea, the alliance said in a press release on Monday.

Submarines, surface ships and maritime aircraft from France, Germany, Greece, Italy, Spain, Turkey, the United Kingdom and the United States will participate in drills to enhance naval forces’ warfighting skills in a multinational and multi-threat environment,, according to the release.

"The submarines will take turns hunting and being hunted, closely coordinating their efforts with the air and surface participants," the release noted.

The United States and NATO have been building up their combined military presence in Europe. In early February, US Secretary of Defense Ashton Carter said Washington would quadruple its funding to support the US posture in Europe, to reach $3.4 billion in 2017.