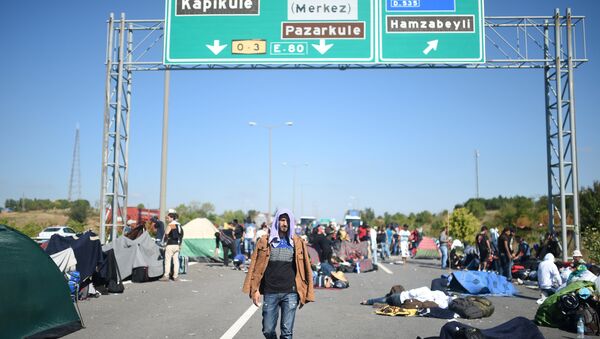 The German interior minister said that all EU member states agreed the protection of external borders with Turkey was a priority in solving the refugee crisis.

MOSCOW (Sputnik) — The protection of external borders with Turkey is a priority for the European Union in solving the ongoing migration crisis, German Interior Minister Thomas de Maiziere said.

"All countries agree that the protection of external borders with Turkey is a priority. This includes the participation of [EU border agency] Frontex, as well as NATO contribution, and it also means that it will be necessary to send refugees back to Turkey," the minister told the ARD television, adding that the next two weeks are due to show how effective such measures are.

According to de Maiziere, Berlin in a long term is not going to accept the fact that some countries are attempting to "solve their problems by shifting the burden to Germany."

Turkey is a key transit country for millions of migrants fleeing the Middle East in attempts to reach Europe. Turkey hosts more than two million Syrian refugees, according to UN estimates.

Germany has become a major destination for hundreds of thousands of refugees and immigrants fleeing war and poverty in the Middle East and North Africa since the start of 2015. Last year it registered over 1.1 million refugees, according to the interior ministry's estimates.