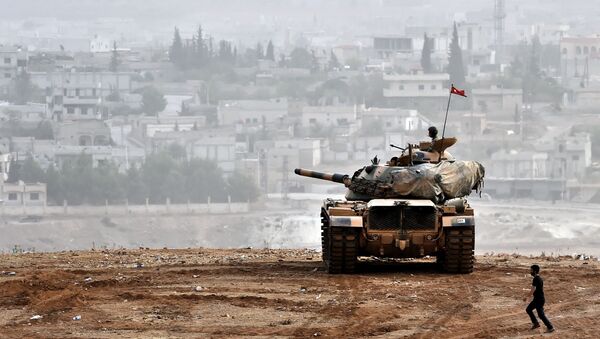 Recep Tayyip Erdogan's obsession with preventing the Kurds from making any gains in Turkey or elsewhere is contributing to greater chaos in the Middle East, yet Ankara seems oblivious to this adverse trend.

Turkey "now finds its foreign policy warped through and through by its obsession with blocking the Kurds, to the point where it seems blind to all other considerations," the Guardian asserted. These "misguided policies" are gradually "becoming a major international problem, threatening to widen the conflict wracking the region."

Turkish authorities launched a military campaign against the Kurdistan Workers' Party (PKK) in mid-2015 after a months-long ceasefire collapsed. In recent months, the internal crackdown, which many have branded a humanitarian catastrophe, has been "merging with the increasingly hot war between Turkey" and the Syrian Kurds. 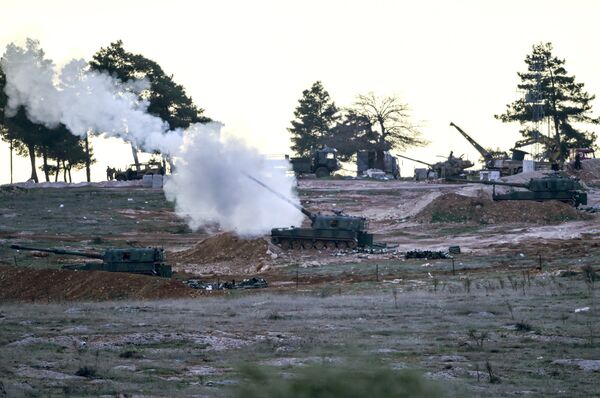 Tanks stationed at a Turkish army position near the Oncupinar crossing gate close to the town of Kilis, south central Turkey, fire towards the Syria border, on February 16, 2016
© AFP 2022 / BULENT KILIC

The Art of Cunning: Turkey 'Will Use Others' to Wage 'Proxy War' in Syria
Unlike Ankara, the Kurds have proved to be one of the key forces capable of standing against Daesh. Their success on the battlefield has empowered the fragmented ethnic group to seek greater rights, fueling fears that the Kurds will ultimately manage to overcome their internal differences in a bid to establish an autonomous, if not independent Kurdistan.

Ankara views this as a nightmare scenario, which, in Erdogan's opinion, is becoming more real. For this reason, Turkey has intensified its anti-Kurdish campaign at home and in northern Syria, which could end in Ankara sending ground forces across the border.

Should this happen, the AKP would likely claim that its operation is ostensibly aimed at creating "a safe haven for refugees or a buffer zone, but in fact [it would be meant] to halt the military progress of the Syrian Kurds," the media outlet explained.

These efforts would be detrimental to the counterterrorism operation in the region, plagued by sectarian violence. But Ankara, in the Guardian's opinion, needs to do more than merely refrain from launching a ground offensive.

"The immediate danger of cross-border fighting may be averted. But until Turkey radically realigns its policies around the pursuit of peace with its own Kurds, it will continue to add to the region's troubles rather than help to contain them," the media outlet observed.