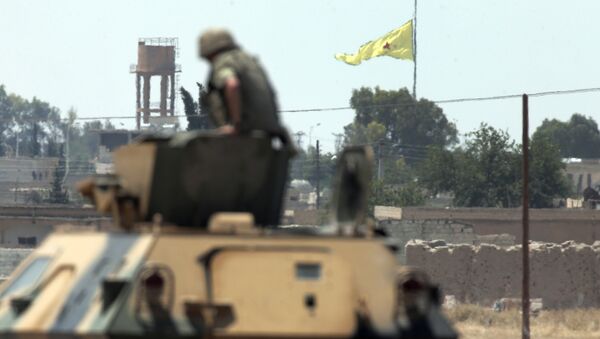 "The policies that have been pursued by Turkey's president lately are turning even his former supporters into sworn enemies. He is particularly reviled in Europe today due to the encouragement of unprecedented levels of migration that Erdogan has been using to blackmail European authorities. Moreover are the scandals uncovered regarding the Turkish president and his family members involving stolen oil from ISIS [Daesh] smuggled for profit which have resulted in Erdogan's reputation going down in flames," Berger notes in his article for New Eastern Outlook.

The Art of Cunning: Turkey 'Will Use Others' to Wage 'Proxy War' in Syria
Following the deadly February 17 attack in Ankara, the Turkish leadership has even gone so far as to blackmail Washington, demanding that the Obama administration should make a choice between the Turks and the Syrian Kurds.

"The only thing we expect from our US ally is to support Turkey with no ifs or buts," Turkish Prime Minister Ahmet Davutoglu told a news conference Saturday, as cited by Reuters.

Speaking at the UNESCO Creative Cities Network event in Istanbul, Erdogan stressed that Turkey "had the right" to launch all kinds of operations in Syria to ensure its own security.

"This has absolutely nothing to do with sovereign rights of states that cannot maintain their territorial integrity. On the contrary, this is about protecting Turkey's sovereign rights. We consider any attempt to prevent us from using this right, no matter where it comes from, as a direct attempt against Turkey's existence," Erdogan stated.

Erdogan's Nightmare of United Kurdistan Fuels Turkey's 'Misguided Policies'
According to Nuray Mert of the Turkish Hurriyet newspaper, "Turkey is in a de facto war-like situation, even if it is not de jure yet."

Mert expressed her concerns that Ankara's foreign policy approach may alienate its partners portraying Turkey "as trouble maker that is doing everything to complicate matters for its allies and hinder the fight against ISIL [Daesh]."

"In short, Turkey's rulers seem to have too many wars to fight against too many enemies. It seems that we who live in this country will lose, regardless of who wins these wars," the Turkish journalist emphasized.

Citing American political scientist David Goldman, Berger assumes that Turkey may become a failed state given its assertive and irresponsible policies. According to Berger, Erdogan's recent actions towards Kurds in Turkey and in Syria can be labeled as a "veritable genocide" that the international community is unlikely to approve.

To make matters even worse, Western military analysts believe that if there is no change in the political course of the country, Turkey won't be able to preserve its own borders and the Kurdish separatism instigated by Ankara's ruthless suppression will become the beginning of the end for the country's integrity.

In the event of a political collapse in Turkey, Recep Erdogan would have only himself to blame.