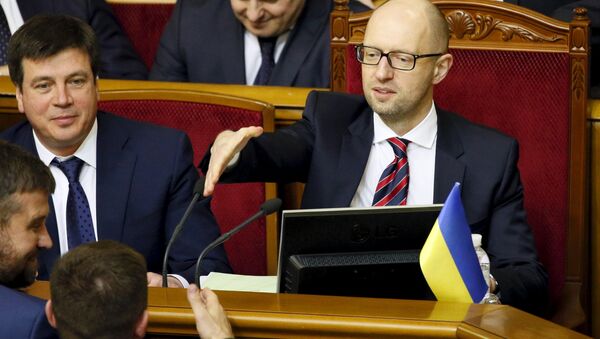 © REUTERS / Gleb Garanich
Subscribe
As right-wing protesters again gather in Ukraine's capital, we look at what instigated the crisis, and whether the new wave of protests has a future, facing a total blackout in Western media and zero support from US diplomats.

As Ukraine looks at the prospect of spiraling into another wave of protest, one key event, the weird failure of the country's parliament to make a no-confidence vote stood out.

Supporters of Ukraine in the European Union expected reforms which would wipe out the country's oligarchs and open its economy to European exporters and outsourcers. What transpired, however, was a doubling down of oligarch rule in Ukraine, which alienated both the EU and the pro-coup constituency.

"For too many of the current elite, a new prime minister could mean a shake-up of the whole government, and possibly a restart of much-delayed reforms that would threaten their financial interests," pro-Maidan television network Hromadske.tv co-founder Maxim Eristavi wrote in Foreign Policy.

"Or it could also mean more competition for resources — a further takeover of some of the top positions in government by business interests connected to President Poroshenko’s ruling party," he added.

The failure to deliver on promises to their own constituents by itself resembles former President Viktor Yanukovych's 2013 reversal on heavily promoted promises to sign an association deal with the EU. That refusal led to the protests, sponsored by Ukraine's top oligarchs, including now-President Petro Poroshenko, and an eventual coup.

The decision to sponsor protests may have been an issue of ambitions for Poroshenko (he stayed off camera, but remained a key backroom negotiator), and poor decisions by Yanukovych, who admittedly had a compromised police force.

Like Yanukovych, Poroshenko never used the platform he advanced, instead seeking cosmetic reform and policies that benefit his personal wealth.

Blaming a civil war that erupted on "Russian aggression" did buy Poroshenko time, but the short attention span explanations his media empire engendered never did explain economic and budgetary collapse.

Maidan Redux? Anti-Gov't Protesters Storm Kiev on Anniversary of 2014 Coup
What is Next?

The right-wing protesters should not hope for easy success. Their efforts have so far faced a near-total blackout in Western media, and countering the police, despite its latest public relations troubles, would not be as easy as the "shooting fish in a barrel" that it was during anti-Yanukovych protests.

Then, officers received questionable orders from superiors and had their phone numbers and addresses leaked to protesters, who made death threats to their families. One protester recently described how he shot police officers in the back of the head in a recent interview.

Poroshenko has also, despite his failure, continued to enjoy the tentative support of US Ambassador Geoffrey Pyatt, widely seen as essentially his handler.

The government has also managed to isolate the protesters to a building which they occupied, and are negotiating, which, if they fail to attract significant numbers in the evening, or stage a significant provocation, as in 2013, could mean having to wait another year.

000000
Popular comments
It showed the Ukrainian people that their vote is worth nothing, their voice is worthless.
margaridaoulman
21 February 2016, 16:39 GMT
000000
Another country all messed up thanks to the terrorist American government. I look forward to the collapse of America so it will be unable to destroy other nations.
Mitach2002
21 February 2016, 16:49 GMT
000000
Newsfeed
0
New firstOld first
loader
LIVE
Заголовок открываемого материала
Access to the chat has been blocked for violating the rules . You will be able to participate again through:∞. If you do not agree with the blocking, please use the feedback form
The discussion is closed. You can participate in the discussion within 24 hours after the publication of the article.
To participate in the discussion
log in or register
loader
Chats
Заголовок открываемого материала
Worldwide
InternationalEnglishEnglishMundoEspañolSpanish
Europe
DeutschlandDeutschGermanFranceFrançaisFrenchΕλλάδαΕλληνικάGreekItaliaItalianoItalianČeská republikaČeštinaCzechPolskaPolskiPolishСрбиjаСрпскиSerbianLatvijaLatviešuLatvianLietuvaLietuviųLithuanianMoldovaMoldoveneascăMoldavianБеларусьБеларускiBelarusian
Transcaucasia
ԱրմենիաՀայերենArmenianАҧсныАҧсышәалаAbkhazХуссар ИрыстонИронауОssetianსაქართველოქართულიGeorgianAzərbaycanАzərbaycancaAzerbaijani
Middle East
Sputnik عربيArabicArabicTürkiyeTürkçeTurkishSputnik ایرانPersianPersianSputnik افغانستانDariDari
Central Asia
ҚазақстанҚазақ тіліKazakhКыргызстанКыргызчаKyrgyzOʻzbekistonЎзбекчаUzbekТоҷикистонТоҷикӣTajik
East & Southeast Asia
Việt NamTiếng ViệtVietnamese日本日本語Japanese中国中文Chinese
South America
BrasilPortuguêsPortuguese
NewsfeedBreaking
07:34 GMTParents of Suspected Michigan Shooter Detained in Detroit, Reports Say
07:24 GMTUK Gov't Reportedly Considers Changing Law on Free Speech After Meghan Markle's Victory Against ANL
07:22 GMTFrench Foreign Ministry Says Evacuated Over 300 People From Afghanistan
07:13 GMTNuclear Deal Talks With Iran in Vienna to Resume Next Week, Russian Envoy Says
06:06 GMTCOVID Live Updates: Mexico Confirms Its First Case of Omicron Variant
06:02 GMT'Johnson's Not Above the Law': Labour Asks Police to Probe Alleged No 10 Parties Amid 2020 Lockdown
05:28 GMT'People's Republic of Comedy': Lithuanian MP Blasts China Amid Taiwan Spat
04:01 GMTTwitter Admits to Erroneously Suspending Accounts Amid a Slew of 'Coordinated and Malicious' Reports
03:41 GMTWorld Must Not Blame Africa for Undervaccination While Denying Continent Shots - Expert
03:32 GMTUS Intel Accuses Russia of Planning 'Multi-Front Offensive' Against Ukraine as Early as 2022
03:30 GMTMeet Mehmet: Dr. Oz Vying for US Senate in Pennsylvania After Trump-Endorsed Candidate Drops Out
01:45 GMTIsraeli ‘Pegasus’ Spyware Used to Hack Phones of 11 US Diplomats - Reports
01:35 GMTColorado Store Shooting Suspect Found Incompetent to Stand Trial - Reports
00:59 GMTAstronomers Spot Ultra-Dense Exoplanet Seemingly Made of Solid Iron Orbiting Nearby Star
00:41 GMTMillions Remain Long-Term Unemployed Despite Big Decline in November US Jobless Rate
00:30 GMTA Failed Biennial World Cup Could Lead to New Global Tournament
YesterdayJan. 6 Panel Postpones Jeffrey Clark Deposition Over Medical Condition
YesterdayExplosive & Nearing Dominance: What the Data Out of South Africa is Telling Us About Omicron
YesterdayOklahoma Suing Biden Admin to Exempt National Guard From Pentagon's COVID-19 Vaccine Mandate
YesterdayUS States of Maryland, Pennsylvania Confirm First Omicron Variant Cases - Statements