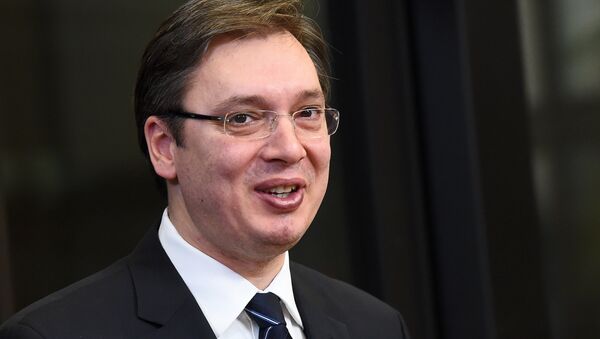 © AFP 2021 / EMMANUEL DUNAND
Subscribe
Serbian Prime Minister Aleksandar Vucic has proposed to appoint a former deputy defense minister as the head of the ministry, the government's press service said in a statement.

Serbia Not Considering Joining NATO
BELGRADE (Sputnik) – On February 5, the Serbian National Assembly voted at an extraordinary session for the dismissal of Defense Minister Bratislav Gasic for his offensive remarks toward a journalist.

"On the basis of the constitutional and legal powers, head of the Republic of Serbia's government Aleksandar Vucic proposed today…to appoint Zoran Djordjevic, the incumbent deputy minister, as the defense minister," the statement published Saturday read.

According to the statement, Djordjevic is due to be acting defense minister of Serbia until a new government is formed, which would follow the snap parliamentary elections in the country.