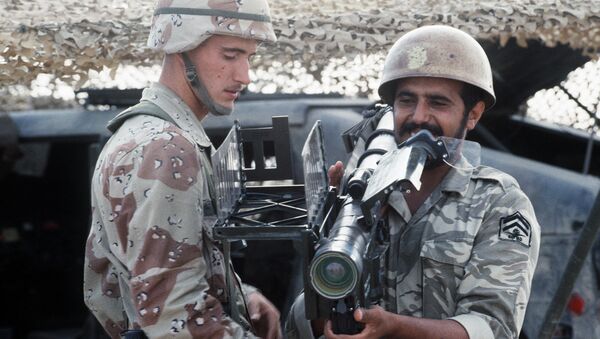 © Wikipedia
Subscribe
With the Syrian Army advancing across the front, Saudi Arabia has announced its willingness to escalate the conflict by supplying portable surface-to-air missiles to terrorists fighting against Syrian forces and, presumably, the Russian forces assisting them. But is it a genuine threat, or just part of Riyadh's campaign of information warfare?

Royals and Rebels: Will Riyadh's Missiles Aim for Russian Jets in Syria?
On Friday, in an interview for Germany's Spiegel Magazine, Saudi Arabian Foreign Minister Adel al-Jubeir announced that Riyadh is prepared to send portable surface-to-air missile systems to Syria to help 'moderate rebels' turn the tide against government forces, which have been making significant breakthroughs in fighting across the country in recent weeks.

"We believe that introducing surface-to-air missiles in Syria is going to change the balance of power on the ground, al-Jubeir explained. "It will allow the moderate opposition to be able to neutralize the helicopters and aircraft that are dropping chemicals and have been carpet-bombing them, just like surface-to-air missiles in Afghanistan were able to change the balance of power there."

Exactly what 'moderate opposition' Mr. al-Jubeir is talking about remains unclear, given that even much of the Western media has admitted that Riyadh, alarmingly, is funding, arming and otherwise supporting Islamist militants.

For the record, the militants that Saudi Arabia supports include al-Fatah, an Idlib-based coalition of Islamist groups including al-Nusra Front, Ahrar ash-Sham and Jund al-Aqsa, all three of which are affiliated with al-Qaeda. Elsewhere across the country, Riyadh has provided assistance to other al-Nusra Front and Ahrar ash-Sham-affiliated groups, and to the Free Syrian Army, an organization which has been whittled down into a small group that actively cooperates with Islamist militants, and which the Pentagon itself has previously estimated consists of "more than 50%…extreme Islamist groups."

Perhaps it is for this reason that another German outlet, Deutsche Wirtschafts Nachrichten, called al-Jubeir's remarks about supporting the "moderate opposition" a euphemism.

Having clarified who would be receiving the Saudi supplied anti-aircraft weapons (i.e. terrorists, most of them recognized as such by the State Department), the question which follows is: will they be sent at all? The fact is that Riyadh makes threats to escalate the conflict in Syria on a consistent basis, most recently with its saber-rattling claims about making preparations to invade the country, an idea which many security analysts have brushed off.

Syria to View Saudi, Turkish Troops as Terrorists if Invasion Launched
Even the threat to send anti-aircraft missile systems to Syria is not an original idea, with Riyadh making the same threat at least twice before, in February 2014, and October 2015.

Moreover, even if the latest once-a-year attempt to intimidate Damascus is not just a bluff this time, the situation on the ground in Syria makes it unclear just how the rebels are going to get the weapons, given that the Syrian Army, supported by Kurdish forces in the north, is rapidly moving to restore control over both the north and south of the country, liberating major population centers and moving to close off the once-porous borders with Turkey and Jordan, through which terrorist fighters, funds, and weapons once freely flowed.

In fact, Minister al-Jubeir's own comments to Spiegel gave away Riyadh's self-doubt with the whole idea.

"This has to be studied very carefully…because you don't want such weapons to fall into the wrong hands," al-Jubeir noted.

With his interviewer countering by asking whether he meant that the weapons might fall "into the hands of Islamic State [Daesh]," the minister deferred to Washington, saying that "this is a decision that the international coalition will have to make. This is not Saudi Arabia's decision."

A decision for the international coalition…If this is the case, it means that the Saudis will not be sending portable anti-air systems to Syria after all. Because unless Washington has totally lost its mind, it will not look too kindly on Riyadh sending weapons to jihadists which could shoot down Western commercial passenger jets or US-led coalition planes bombing Daesh in Iraq and eastern Syria.

Saudis Trying to Embroil Washington in a Quagmire in Syria
After all, it is a well-known fact (one which even rebel supporters now openly admit) that prior to the Syrian Army's liberation of Nubl and Zahraa in Aleppo province earlier this month, rebel factions had been actively engaged in trade with Daesh, moving fuel, food, and presumably weapons and fighters back and forth.

The US position, essentially, is what prevented Riyadh from sending anti-aircraft systems to Syria in the first place.

In February 2014, commenting on the latest rumor of Saudi portable SAM deliveries to Syria, The Wall Street Journal pointed out that "the US has long opposed arming rebels with anti-aircraft missiles, for fear they could fall into the hands of extremists who might use them against the West or commercial airlines. The Saudis have held off supplying them in the past because of US opposition. A senior Obama administration official said Friday that the US objection remains the same. 'There hasn't been a change internally on our view', the official said." Then, as now, he who pays the piper calls the tune.

In the final analysis, even if all of the above turns out to be wrong, and Saudi Arabia does decide to open a Pandora's Box by sending mobile SAMs to Syria, the move would not change the outcome of the Syrian war.

Speaking to International Business Times UK about the Saudi foreign minister's comments, Nic R. Jenzen-Jones, the director of the technical intelligence consultancy Armament Research Services, emphasized that "from a technical perspective, the types of MANPADS or other SAMs (surface-to-air-missiles) Saudi Arabia would be likely to supply to moderate rebel groups are probably going to be of limited effectiveness against some of the modern Russian combat aircraft operating within Syria."

Dangerous Games: Ankara, Riyadh 'Lack Clear Strategy' on Syria
The systems the Saudis would provide, Jenzen-Jones explained, "are likely to be legacy missile systems," which, for the most part, could "pose a notable threat [only] to Syrian government aircraft, particularly rotary-wing aircraft" (i.e. helicopters).

In the long term, Russian military expert Viktor Murakhovski suggests, Saudi SAM deliveries "will not significantly influence the course and outcome of the ongoing fighting in Syria."

Would they force Syrian and Russian aircraft to adjust their tactics? Definitely. Could they lead to losses for Syrian aircraft? Possibly. Could they result in Russia assisting the Syrian Air Force by providing it with modern SAM countermeasures? Certainly. Would they affect the outcome of the war? Definitely not.

jaodernein garshinvic
22 February 2016, 01:27 GMT1
000000
Riyahd should take note of the consequences of supplying shoulder SAM's to ISIL,as warned by Russia. 1.They will be used to down their own civilian aircrafts and that could be anywhere in the world as ISIL is a massive network. Russia has trapped them in a catch 22.See if they can figure this out. 2.They shouldn't think they'll get away with this in further destabilising the borders and the legitimate Government of Syria.Russia,Syria and Iran will retaliate and it will not be good for them.
25 February 2016, 00:38 GMT1
000000
Newsfeed
0
New firstOld first
loader
LIVE
Заголовок открываемого материала
Access to the chat has been blocked for violating the rules . You will be able to participate again through:∞. If you do not agree with the blocking, please use the feedback form
The discussion is closed. You can participate in the discussion within 24 hours after the publication of the article.
To participate in the discussion
log in or register
loader
Chats
Заголовок открываемого материала
Worldwide
InternationalEnglishEnglishMundoEspañolSpanish
Europe
DeutschlandDeutschGermanFranceFrançaisFrenchΕλλάδαΕλληνικάGreekItaliaItalianoItalianČeská republikaČeštinaCzechPolskaPolskiPolishСрбиjаСрпскиSerbianLatvijaLatviešuLatvianLietuvaLietuviųLithuanianMoldovaMoldoveneascăMoldavianБеларусьБеларускiBelarusian
Transcaucasia
ԱրմենիաՀայերենArmenianАҧсныАҧсышәалаAbkhazХуссар ИрыстонИронауОssetianსაქართველოქართულიGeorgianAzərbaycanАzərbaycancaAzerbaijani
Middle East
Sputnik عربيArabicArabicTürkiyeTürkçeTurkishSputnik ایرانPersianPersianSputnik افغانستانDariDari
Central Asia
ҚазақстанҚазақ тіліKazakhКыргызстанКыргызчаKyrgyzOʻzbekistonЎзбекчаUzbekТоҷикистонТоҷикӣTajik
East & Southeast Asia
Việt NamTiếng ViệtVietnamese日本日本語Japanese俄罗斯卫星通讯社中文（简体）Chinese (simplified)俄罗斯卫星通讯社中文（繁体）Chinese (traditional)
South America
BrasilPortuguêsPortuguese
NewsfeedBreaking
17:21 GMTCapitol Police Chief Warns of Threats Ahead of Rally in Support of Protesters Charged in 6 Jan. Riot
17:06 GMTBoris's Johnson: PM Cracks Joke About his Fertility at Post-Reshuffle Cabinet Meeting
16:23 GMTTikTok Bans Hashtag Linked to Cyberbullying of French Students Born in 2010, Reports Say
16:21 GMTUS Defence Secretary Approves Request to Deploy 100 Troops at Capitol Protest
16:04 GMTCanada Caught Off Guard By New AUKUS Security Pact, Report Says
16:01 GMTRepublican FEC Member Doesn't Rule Out Bias in Twitter Banning Hunter Biden Laptop Story
16:00 GMTTel Aviv ‘Significantly’ Expanding Red Sea Presence Amid Alleged Iran Threat: Ex-Israeli Navy Chief
15:56 GMTFinal 9/11 Hearing Abruptly Cancelled at Gitmo Due to COVID-19-Related Illness - Reports
15:47 GMTDemocratic Lawyer Charged in Probe of Trump-Russian Investigation Pleads Not Guilty
15:13 GMTBlinken: US Ready to Delay New Sanctions if Ethiopia and Eritrea Act to Resolve Conflict
14:55 GMTLondon Gang Who Killed NHS Worker From 'Wrong Postcode' Jailed After Murder Sketches Found
14:53 GMTRussia Launching Trials of Simultaneous Vaccination Against Flu, COVID-19
14:30 GMTVideo: Police Act Against Climate Protesters Blocking M25 Motorway
14:15 GMTRonaldo Will Cause as Many Problems as He Solves for Solskjaer, Ex-Liverpool Player Carragher Says
14:03 GMTXi Urges SCO to 'Resist' External Meddling After US, Australia Vow to Bolster Ties With Taiwan
14:02 GMTUN Security Council Holds Meeting on Afghanistan
13:39 GMTHitting US Debt Ceiling Could Trigger Recession, White House Says
13:32 GMTUnited Airlines Briefly Grounded Flights in US, Canada Due to Computer Issues, FAA Says
13:29 GMTDutch Acting Defense Minister Resigns Over Kabul Evacuations Chaos, Reports Suggest
13:27 GMTFrance Says It Cannot Trust Australia in Trade Talks After Canberra Ditched Joint Sub Deal