No-Fly Shield: Why Do ‘Putin’s Missiles’ Concern the West and NATO so Much? 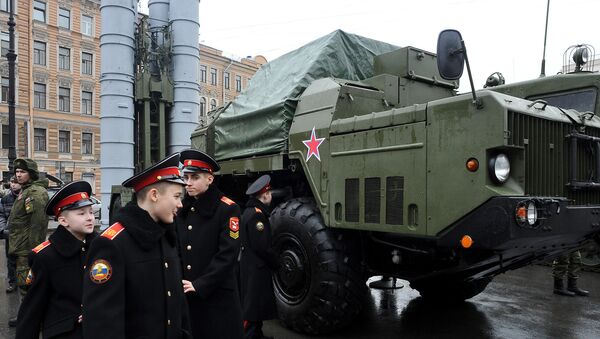 © AFP 2022 / OLGA MALTSEVA
Subscribe
The upcoming delivery of one of the world's most advanced air defense systems, Russia’s S-300, to Iran has come as terrifying news to the West and NATO, primarily because it will make so-called surgical strikes against individual facilities in Iran impossible and will create more no-fly zones on the map, says German media.

Russia is set to deliver its first S-300 air defense systems to Iran as soon as Tehran clears the payment. This comes as terrifying news to the West and NATO, because it is going to mean an end to the “era of risk-free airstrikes,” according to German weekly magazine Stern.

Safe Skies: Russia to Send First S-300 Air Defense System to Iran Thursday
The surface-to-air missile system (NATO reporting name SA-10 Grumble) is a defensive weapon against aircraft, cruise and ballistic missiles, with a range of up to 200 kilometers, able to fire at multiple targets and down an aircraft as high as 20 km. Additionally, different modification of radars associated with the S-300 can track aerial missiles up to 1,000 km travelling at up to 10,000 km/h and cruise missiles up to 300 km away.

Its hit precision rate is up to 93 percent.

This range and capability could allow Iran to position the S-300s in such a way as to project its aerial power far beyond its own borders, and make it attack-proof to Israel and almost any country without fifth-gen (stealth fighter) capabilities.

The deployment of such a system will make so-called surgical strikes against individual facilities in Iran impossible, Stern says. Subsequently, any military action against Tehran becomes extremely difficult and costly.

Military Upgrade: How Russia Can Help Iran Modernize its Navy
As the systems are mobile, the US would have difficulty targeting the systems themselves while non-stealth jets would not be able to operate safely over the country.

“Putin’s missiles,” as the outlet called them, will create large "non-entry zones" on the map, which the “Western military machine” is not used to.

Similar concerns, however regarding Russian and its defensive potential, have been voiced by NATO Deputy Secretary General and former US ambassador to Russia Alexander Vershbow at the Munich Security Conference.

“The things that worry us the most are their anti-access/area-denial [A2/AD] capacity — the Bastion defense system capability that they are building up in the high north in Murmansk, the Kola Peninsula, in Kaliningrad and in the Black Sea, and potentially now in the eastern Mediterranean — as potentially impeding and complicating NATO reinforcements and other NATO operations. We have both strategies and means to counter that but it may require additional investments on NATO’s part,” Vershbow told in an interview with Defense News newsweekly.

All the above, Stern says, already means that the era in which the US could easily apply its military might without any risk to itself, has come to an end.

S-300 Was Just the Beginning: Iran Plans Huge Arms Deals With Russia
However, the delivery of S-300 systems seems to be just the beginning. Iranian Defense Minister Hossein Dehghan was on an official visit to Moscow on February 15-16.

Iran is interested in Russia’s assistance in creating an integrated echelon air-defense system comprising short-, medium- and long-range components. Such a system could be built with Russian technologies. One of its main parts is Su-30SM Flanker multirole jet fighters.

The two countries are also in talks on the deliveries of a wide range of weapons and military hardware, including Bastion coastal missile launchers with Yakhont anti-ship missiles, Yak-130 jet fighters, Mi-8/17 helicopters as well as diesel-electric submarines, frigates and T-90 tanks.