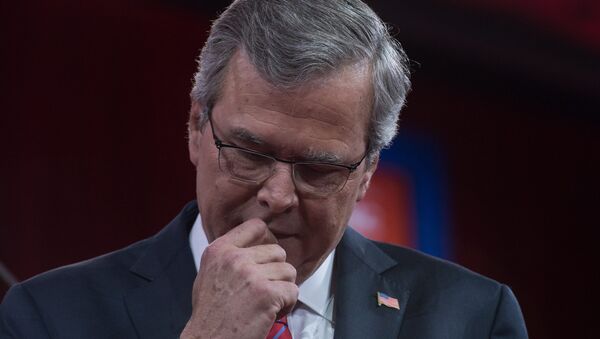 Former Florida Governor Jeb Bush, once tipped as the frontrunner of the Republican Party contest for the US presidential nomination, admitted defeat and pulled out of the race after being defeated in the South Carolina primary.

WASHINGTON (Sputnik) — Bush was a twice-elected governor of Florida, and the brother and son of previous US Presidents George W. Bush and George Herbert Walker Bush.

"The people of Iowa, and New Hampshire and South Carolina have spoken. So Tonight I am suspending my campaign," Bush announced on Saturday night, after projections showed him winning little more than 8 percent of the Republican vote.

Bush was running in fifth place in South Carolina, and had done equally badly in the Iowa caucuses and New Hampshire primary, despite having amassed an enormous financial "war chest" of $100 million for his campaign.