Can Europe's Migrant Crisis Be Solved With Help From Down Under? 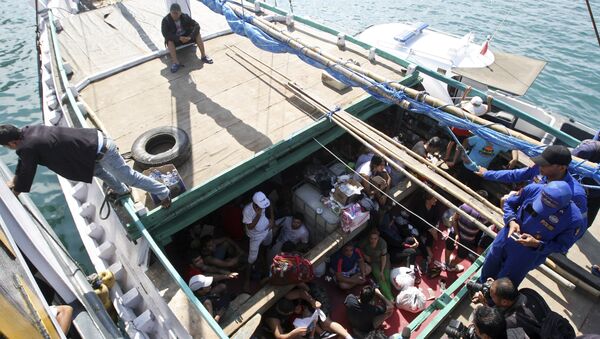 © AP Photo / Firdia Lisnawati
Subscribe
Australia's migrant policy has attracted criticism from human right groups, but has proved effective at controlling immigration from overseas. What the EU may be able to learn from Canberra's example?

Australia Will Deport Over 250 Refugees Suffering From Cancer
Although Australia's strict anti-immigration policy is unpopular with human rights groups, its effectiveness has ensured that mandatory detention for people arriving unauthorized by boat and offshore processing arrangements in the Pacific have bipartisan support from the center-right Coalition as well as the Labor Party.

In a Lenta.ru article entitled 'Guantanamo for Refugees: How harsh methods helped Australia beat illegal migration', Russian journalist Aleksey Naumov explored whether Australian methods could provide any lessons for the EU, which is currently facing its largest crisis of migration since the Second World War.

By January 31, 2016, there were 1,807 people in immigration detention facilities in Australia, as well as 484 in the island Republic of Nauru and 916 on Manus Island in Papua New Guinea. The average period of time people were detained in the facilities was 457 days.

Naumov drew attention to some of the complaints about people being held in inhumane conditions. In particular, a letter from 600 detainees at the Manus facility gained media attention after it was published online by human rights lawyer Julian Burnside on November 30 last year, who called it 'A Christmas letter from Manus.'

The letter was addressed to Malcolm Turnbull, Prime Minister of Australia and Peter Dutton MP, Minister for Immigration and Border Protection, and asked the authorities for "something different this time," after previously having requested to be freed from detention without success.

"We realized that there are no differences between us and rubbish but a bunch of slaves that helped to stop the boats by living in hellish condition. The only difference is that we are very costly for the Australian tax payers and the Politicians as our job to 'stop the boats' is done," they wrote.

They gave the politicians three suggestions for ways to put them out of their misery: a navy ship to dump them in the ocean, a gas chamber, or an injection of poison.

"This is not a joke or a satire and please take it serious. We are dying in Manus gradually, every single day we are literally tortured and traumatized and there is no safe country to offer us protection as DIBP says," they wrote, wishing "Merry Christmas in advance," and signed "Manus refugees and asylum seekers."

The men on #manus island have sent a proposal to the Australian government. Please read as they wish to die pic.twitter.com/U5CMDNKkmm

Australian Prime Minister John Howard refused to let them enter Australia, and offshore processing centers were set up on Manus Island and in Nauru.

The two countries received millions of dollars in aid in exchange, and a total of 1,637 unauthorized arrivals were detained at the two facilities after the Australian navy ships diverted their boats there between 2001 and 2008.

In February 2008 the incoming Labor Party ended the Pacific Solution policy, winning the approval of human right organizations. However, in 2012 the same government reinstated the policy in order to deter further migration by boat.

"Prime Minister, in 2007 many people who voted for Labor voted to get rid of Nauru, get rid of Manus Island, get rid of the Pacific Solution. What's changed?" then-Prime Minister Julie Gillard was asked about the U-turn.

In September 2013 the new Coalition government led by Prime Minister Tony Abbott announced the launch of "Operation Sovereign Borders," described as a "military-led response to combat people smuggling and to protect our borders."

No Way. You will not make Australia home — English https://t.co/faJnNKn1MK via @YouTube

​The Australian government produced a video which was translated into several languages, in which Operation Sovereign Borders commander Angus Campbell warned prospective migrants that "the message is simple: if you come to Australia illegally by boat, there is no way you will make Australia home."

"The facts speak for themselves," the incoming government said.

"Since Kevin Rudd dismantled the Coalition’s border protection policies in 2008, more than 1,000 people have perished at sea, and over 48,000 people have arrived on almost 800 illegal boats."

According to Australia's Department of Immigration and Border Protection, between September 2013 and October 2014 OSB intercepted 23 illegal vessels which arrived in Australian waters, and transferred their passengers to detention centers in Australia.

ABC Australia reported on the first six months of Operation Sovereign Borders, noting on a drop in the number of asylum seeker boats, and that "one area where the Coalition differs from the previous government is in its willingness to tow boats back, a strategy that has been met with anger from Indonesia."

It reported that in 2013-14 the Department of Immigration allocated AUS $3.3 billion  (US$2.4 billion) for offshore asylum seeker management, and AUS $342 million (US$245 million) was allocated by the Australian Customs and Border Protection Service for a  Civil Maritime Surveillance and Response Program.

Some 150,000 People Likely to Leave Libya for Europe in Next Weeks
While Australia's experience might be of some value to Europe, Naumov cautions that the numbers of migrants reaching Europe presents a different set of problems.

"Tough treatment of migrants used to be an instrument that was on the margins, but now it is gaining increasing popularity among European politicians. However, the scale of the problem which Europe is facing is completely different," he concluded.

000000
Popular comments
If the EU wants to learn how to abuse and terrorize immigrants, it can learn a lot from Australia and New Zealand.
karlof1
21 February 2016, 18:17 GMT
000000
karlof1, Careful. Your heart's bleeding all over my good carpet.