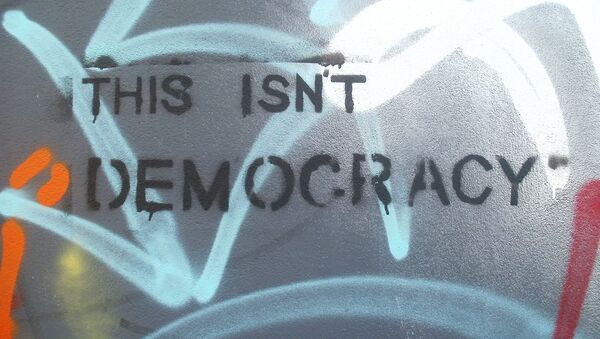 Loud & Clear host Brian Becker is joined by Kevin Akin, the secretary of California's Peace & Freedom Party, and Richard Winger, the editor of Ballot Access News, to discuss the rigging of the political system in the United States following the Democratic caucus in Nevada and the upcoming Republican primary in South Carolina.

"In the rest of the world there is not a single country that has government administer primary elections to help parties to choose their nominees," Winger continued. "I think it works far better for the rest of the Democratic world where parties choose their own nominees any way they want."

According to Winger, the current two-party system in the US is out of date. He recommends switching to a multi-party democracy, similar to that of many European countries, allowing for many parties to choose from.

According to Akin, the extremely rich and powerful 1 percent have the best chance in a presidential race. If the former New York mayor Michael Bloomberg, a billionaire many times over, wants to become part of the US legislative body, "all he has to do is to instruct his accountants to make his money available and voila he will have a party," unlike an ordinary candidate who must find money and ask for political support.

"The US and Nigeria are the only two countries in the world that have just two parties in the national legislative body," Akin found. "A two-party system is artificial; it will not exist unless the government bans the rules to get extra privileges and protection for two parties and squashes the rest of them."

He pointed out that independent candidates are excluded from debates primarily because they cannot pay to advertise on TV.

"The big money guys have basically taken a big step towards total control over the electoral system," Winger stated.