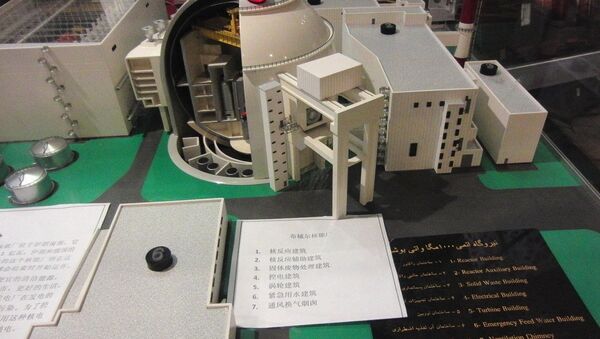 © Photo : Wikipedia /Bernd.Brincken
Subscribe
Commenting on the announcement by Rosatom that the construction of two new units at the Bushehr nuclear power plant complex would start soon, Hassan Beheshtipour, political commentator for Iranian English-language news network Press TV, told Sputnik that the news only confirms the growing atmosphere of trust between Tehran and Moscow.

"We are coordinating the date with our Iranian colleagues; everything is basically ready. We are about to complete the survey of the seismological situation," Kiriyenko said.

In November 2014, Russia and Iran agreed on the construction of two nuclear reactor units at the Bushehr Nuclear Power Plant, using Russian technology, with the possibility of six additional units in the future.

Commenting on Rosatom's announcement, Hassan Beheshtipour, a documentary producer and political commentator who contributes frequently to Iran's Press TV, told Sputnik Persian that the Russian-Iranian agreement is just another indication of the growing trust between Moscow and Tehran.

"Some time ago," the commentator noted, "the first phase of the Bushehr Nuclear Power Plant became a symbol of Russia's cooperation [with Iran], not only in the field of peaceful nuclear energy, but in general. Today we are experiencing a similar period, when the two sides have imbued one another with an even greater sense of confidence. Undoubtedly, the construction of the new reactors will strengthen cooperation in other areas."

In a Dangerous World, Russia and Iran Must Work Together
"The agreement between Iran and Russia on the construction of the second and third stages of the Bushehr NPP was signed some time ago," Beheshtipour recalled. "However, the details were not disclosed. Now its clear now that everything is set for implementation. Most likely, the new reactors will provide the standard Russian capacity – 1000 MW [apiece]."

"Regarding news of the possible participation of Hungary in Bushehr II-III, here a clarification is necessary," the commentator explained. "The founder and lead contractor on the project will be Russia. Other countries, most likely, will be able to act as exporters of certain types of equipment, and to perform auxiliary functions. But here things are not so simple. It is enough to recall that Ukraine had at one time committed itself to supply a steam turbine for the first phase of Bushehr, but then, at the last moment, refused to honor the contract, pointing to the sanctions which were in place against Iran at the time."

Ultimately, Beheshtipour says, "Russia remains a priority option for Iran when it comes to the construction of powerful nuclear reactors. Moreover, the new project at Bushehr is attractive for Iran in the strategic sense – as it means the construction of two new units at once. It's true, Tehran signed an agreement with China on the construction of a small capacity plant [in] southern Iran, but we already have a record of experience with Russia – one which has time-tested."

000000
Popular comments
it will be interesting to see how iran develops over the next few years as a player in the me.
michael
20 February 2016, 22:33 GMT
000000
michael, Rostatom recently signed a deal with Sisi in Egypt as well: www.rosatom.ru/en/presscentre/highlights/c5ad7a804aa37da1b1fcbf8d686b7041 And Russia will also be financing atomic energy courses at Egytpian universities to complement this: thecairopost.youm7.com/news/165014/news/egyptian-and-russian-universities-sign-atomic-energy-educati Likely already caused a few twitches in Riyadh, DC and elsewhere. Definitely something to watch.