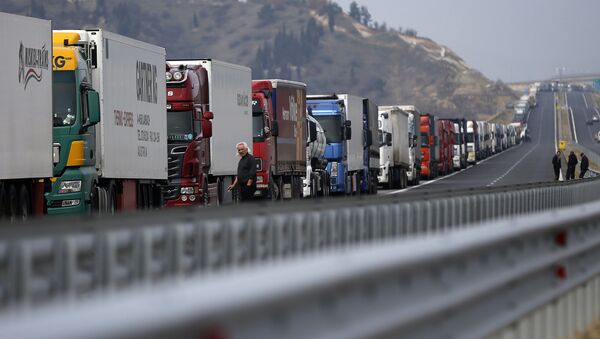 All border crossings between Bulgaria and Greece remained closed, because Bulgarian truck drivers began a counter-blockade of the Greek border in response to Greek farmers' blockades staged in protest over their government's pension reform plans.

Greek Farmers Clash With Police While Protesting Pension Reforms
MOSCOW(Sputnik) — All border crossings between Bulgaria and Greece remained closed on Saturday amid a double blockade by truck drivers on both sides on the border, the Bulgarian Interior Ministry said, as cited by local media.

According to the Sofia Globe news, the Bulgarian activists have vowed to keep up with their protest until the Greeks farmers lift their blockade.

European Farmers' Protests May 'Prod EU to Scrap Anti-Russian Sanctions'
Bulgarians have been canceling their vacations in Greece in response to the blockade, with two-thirds of Bulgarian reservations in the country reportedly canceled.

Greek farmers have been blocking transport routes across Greece since mid-January in protest over looming tax and pension system reforms demanded by Greece's international lenders.