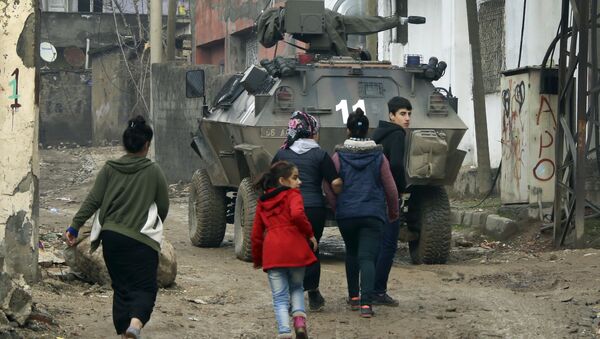 Turkey is playing a pivotal role in the escalation of violence both in the Middle East and Europe, Czech-based freelance journalist Martin Berger notes, adding that Ankara is just waiting for a "legal pretext" for the invasion of Syria.

Back in 1999 Erdogan quoted a Turkish poet who said: "Mosques are our barracks, minarets our bayonets, domes our helmets, the believers our soldiers."

Since then the Turkish leader has been harboring a plan to create a neo-Ottoman Empire. To reach the goal he has established close ties with Islamists, including the notorious Muslim Brotherhood, as well as with Turkish ultranationalists and its paramilitary youth group, the Grey Wolves.

To bolster Turkey's influence on European policymakers, Erdogan has flooded the continent with refugees and blackmailed Brussels into providing Ankara with both substantial financial aid and clear prospects of the EU membership.

At the same time, the Turkish President has kicked off a large scale propaganda campaign aimed at discrediting Russia's policies in the Middle East.

"This envy is supposed to allow Erdogan to rally various social groups under the banner of fighting a common enemy, or at least that's what Turkey's President believes," Berger narrates in his article for New Eastern Outlook.

Daesh Terrorists: A Multifunction Tool in Hands of Ankara, Riyadh, NATO
In addition, Ankara launched an all-out war against Kurds in Turkey's southeast region in 2015 and has repeatedly attacked Kurdish People's Protection Units (YPG) in Syria. For several days the Turkish artillery has been shelling the northern parts of Syria.

"The Turkish regime continued on Friday its crimes against the Syrian people, instructing its heavy artillery to attack regions in Aleppo northern countryside in a flagrant violation of international law," SANA wrote on February 19.

Apparently to expand its Lebensraum in the Middle East, Turkey de facto invaded Iraq regardless of the vocal displeasure of Baghdad, and has pledged to launch a ground operation in Syria, as soon as Washington authorizes the campaign.

It is no secret anymore, that Ankara is involved in illicit oil trade with Daesh, as well as sponsoring the training and arming of radical Islamic fighters together with Saudi Arabia and Qatar. However, Washington and its NATO allies turn a blind eye to Erdogan's criminal actions.

"President Obama expressed concern about recent Syrian regime advances in northwest Syria and urgently called for a halt to actions that heighten tensions with Turkey and with moderate opposition forces in northern Syria, and undermine our collective efforts in northern Syria to degrade and defeat ISIL [Daesh]… He emphasized the unwavering commitment of the United States to Turkey's national security as a NATO Ally," the recent transcript of the US President's Call with President Recep Tayyip Erdogan of Turkey reads.

Some experts believe that the deadly February 17 attack in Ankara was deliberately blamed on YPG by the Turkish leadership to justify a potential ground operation in northern Syria.

​"In this situation an 'unexpected' incident near the Syrian-Turkish carried out by ISIS [Daesh] could become an ideal solution for Turkey, providing it with a 'legal' pretext for the invasion of Syrian territory. But ISIS has no resources to carry out such an attack since it's stuck fighting in Syria and has practically been surrounded near As Sin. Under these conditions, only hosted Turkish secret services could provide Ankara with a pretext that it needs so desperately," Berger stressed.

The journalist notes that Erdogan's ability and willingness to create such pretexts is well-known and documented.

In this light there is the possibility that Ankara will itself create "the last straw" situation that will allow the Turkish leadership to invade Syria.