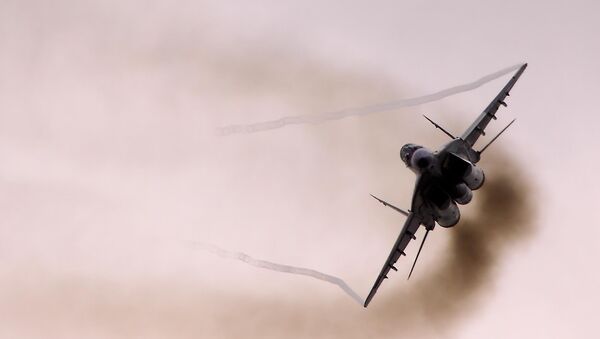 A new group of MiG-29 and MiG-29S multirole fighter jets as well as a Mi-8MT military transport helicopter have been deployed to the Russian airbase in Armenia, the press service of the Russian Southern Military District said on Saturday.

Why Did Russia, Armenia Create Joint Defense System in Caucasus?
MOSCOW (Sputnik) — A new group of MiG-29 (NATO reporting name: Fulcrum) and MiG-29S fighter jets as well as a Mi-8MT (NATO reporting name: Hip) military transport helicopter have been deployed to the Russian Erebuni airbase in Armenia, the press service of the Russian Southern Military District said on Saturday.

"The fourth-generation fighters and a Mi-8MT will be assembled by airbase technicians and put on combat duty in near future," the press service said in a statement.

"The first flights of newly-arrived MiG-29s are expected to begin in mid-March," the statement said.

The district’s Erebuni base in Armenia was formed in 1995 and the MiG-29 Fulcrum multirole fighters were deployed there in 1998. In July 2001, the units at Erebuni were incorporated into an air division of the Russian 102nd Military Base in Gyumri.

In December, several attack Mi-24P (NATO reporting name: Hind) and Mi-8MT helicopters were transferred to the base.

Russian pilots are expected to begin helicopter flights from the base in the first quarter of 2016, according to the Southern Military District’s press service.