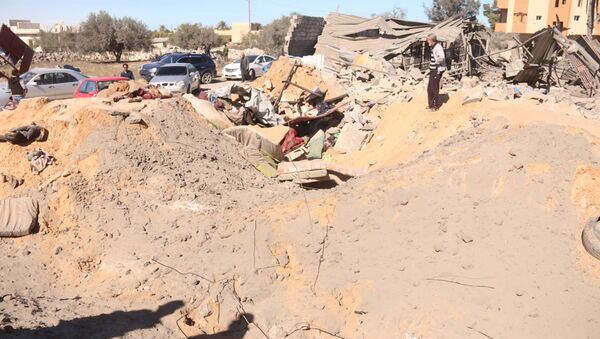 US Defense Department spokesperson Peter Cook said that Washington conducted airstrikes in Libya against terrorists' training camp and Daesh leader Noureddine Chouchane after US Defense Department received information that Daesh "were planning external attacks on US and other Western interests in the region."

WASHINGTON (Sputnik) — The US-led coalition against the Islamic State (ISIL or Daesh) conducted airstrikes in Libya against terrorists' training camp and Daesh leader Noureddine Chouchane after establishing he was planning attacks in the region, US Defense Department spokesperson Peter Cook said in a briefing on Friday

"We took this action against Sabir [Chouchane] in the training camp after determining that both he and the ISIL [Islamic State] fighters at these facilities were planning external attacks on US and other Western interests in the region," Cook stated.

Peter Cook also said that the airstrikes in Libya were conducted with the knowledge of the Libyan government and in accordance with international law.

"This operation was conducted with the knowledge of the Libyan authorities," Cook said. "We believe that this [operation] was carried out under international law and specifically… was consistent with domestic and international law."

Pentagon spokesperson Peter Cook stressed that he would not rule out new attacks on the Daesh militant group in Libya.

"We continue to monitor ISIL as a threat within Libya…We are watching it very closely as we've indicated for some time and we will do that in conjunction with our partners in the region, we will also have a sincere interest in making sure that ISIL…is not able to establish more of a foothold in Libya than it already has," Cook explained.

The spokesman added that the United States believes there are other Daesh training camps in Libya that they are monitoring closely.