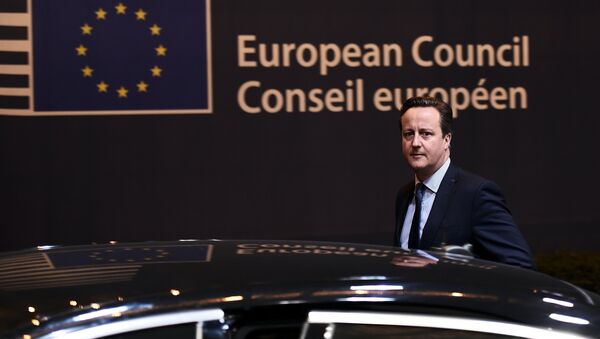 British Prime Minister David Cameron said that he will stay in Brussels untill Sunfday in order to reach agreement on EU reforms demanded by the United Kingdom.

British Blackmail: Critics Slam London as European Dissent Grows
MOSCOW (Sputnik) — British Prime Minister David Cameron said on Friday that he was willing to stay for another two days in order to reach agreement on EU reforms demanded by the United Kingdom.

"We are happy to stay until Sunday, I have told the wife and children," Cameron said as talks over the deal resumed, according to an ITV News video.

On February 18-19, EU leaders were meeting in Brussels to discuss the United Kingdom's plans to hold a referendum on its membership in the bloc unless concessions are achieved over political and economic power devolution as well as curbs on intra-European migration and migrants' social benefit entitlements.

Cameron and Tusk Begin Brexit Euro Tours as D-Day for London Approaches
Earlier on Friday, European Council President Donald Tusk said that the first day of the Brussels summit did not lead to any substantial results on the issue of Britain’s future in the European Union, although some progress was made.

On February 2, European Council President Donald Tusk offered an array of reforms to meet some of London's demands, while British Prime Minister David Cameron stressed that there may be just months to reach an agreement before a Brexit referendum takes place.

Cameron pledged to hold a referendum on the United Kingdom's future within the European Union by the end of 2017. Ahead of the vote, the British prime minister is seeking to revise the terms of the country's membership of the bloc, including an exemption from the EU principle of an ever-closer union and in-work benefit curbs for EU immigrants.